It was a warm June day in 1985.  We turned on the noon news while we ate lunch.  The reporter mentioned that President Ronald Reagan had arrived at the Indianapolis airport and was on his way to Mooresville.  This was news to me.  I had no idea that the President was coming to the Hoosier State.

Mooresville?  That’s not too far from home, I thought.  I jumped into my Ford Aerostar and drove, a bit faster than usual, across Highway 144 to Mooresville. Going into town, I pulled into the first parking place I came to.  I quickly walked several blocks to Indiana Street where people, police cars and motorcycles were everywhere.  I learned that the Presidential motorcade had already passed by.  A few blocks down the street, President Reagan was inside Mac’s Restaurant giving his speech.

I asked a police officer if the motorcade would be passing back the same way.  He said that it would.  I took a position along the curb that I thought would give me a good glimpse of the Presidential limousine as it passed by.  As I stood there holding that spot, I could see sheriff’s deputies on horseback patrolling the area in back of the restaurant.    Everywhere there were dark-suited men wearing ear pieces.

Barrels blockaded the street.  At one point, a young man on a Harley-Davidson drove between two barrels and headed down the street in the direction of the restaurant.

“Turn that cycle around!” yelled an Indiana State Trooper.

“I’m turning, I’m turning,” replied the man sheepishly, as he quickly steered a 180.

Soon I could see movement outside the restaurant.  Cars slowly curled their way out of the parking lot and began a single-file procession up the street toward where I was standing.  There were several black Cadillac limousines and I wasn’t sure which one to focus on with my camera.  I practiced framing shots through the lens.  I wanted to be ready.

As the limousines came close to me, I held my camera steady.  Then I caught a glimpse of the Presidential seal.  I could see a man in the back seat of the car, behind the dark glass of the window.  Was it Reagan?  As the car came closer, I saw the familiar cock of the head and beaming smile.  It was Reagan, all right.  He was smiling and had a microphone in his hand as he looked out the window.   For a fraction of a second, our eyes met.   For me, time stood still.   For him, of course, the world rolled on in the next instant, and he kept smiling as the Cadillac moved down the street.

That split second, when I looked into the eyes of President Ronald Reagan, is with me still.     To me, Reagan was President with a capital “P.”  He was a big man in more ways than one.  He was larger than life.  At a low point for the nation, he arrived on the scene like the cavalry in a western movie.  He rode in on a big horse with a winning smile and pride and enthusiasm for all things American.

Early in his Presidency, he remarked, “What I’d really like to do is be the President
who made Americans believe in themselves again.”

Mission accomplished, Mr. Reagan, from the guy with the camera that summer day in Mooresville, Indiana. 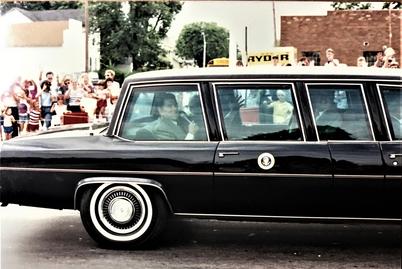 A Glimpse of Greatness