The Hoosier Poet, James Whitcomb Riley, born in Greenfield, was the local boy who made good, better, and best.  He found fame and fortune by putting into poetry the world he saw around him.  He penned “That Old Sweetheart of Mine,” “Little Orphant Annie,” “Knee-Deep in June, “ “When the Frost Is On the Pumpkin,” “Out to Old Aunt Mary’s” and hundreds of other pieces that found their way into the hearts of millions.

It’s difficult for 21st century Hoosiers to understand how “big” Riley was in his day.  Before television, before movies, before radio, before the mass media as we know it, Riley was a “superstar.”  Through his books and public appearances, his name and face were known across the nation.  His books were the mainstay of Bobbs-Merrill, the Indianapolis publishing company.

Poetry was fashionable and commercial in the 19th century.  Poems rose and fell in popularity much the same as hit songs do now.  Riley’s nostalgic themes, comic stories, and country dialect caught on with the masses.  He toured the nation on the popular lecture circuits of the day.  He was one of the first “stand-up” comedians, delighting packed houses from coast to coast.  Riley appeared with the heavy hitters, including Oliver Wendell Holmes, John Greenleaf Whittier, and Mark Twain, who was on the bill with Riley in February, 1894, at the old Madison Square Garden in New York City.  Introducing Riley to the crowd, Twain said he “enchants your ear, and soothes your spirit, and touches your heart with the sweet and genuine music of his poetry.”

He was an important man in literary circles, praised by Rudyard Kipling and fellow Indiana writers Meredith Nicholson and Booth Tarkington.  William Dean Howells, highly-respected contemporary critic, called Riley “a very great artist, with insight as subtle as the New England poets.”  In demand, he was invited everywhere and was a guest at the White House more than once.

As a child, Riley didn’t much like school.  Nevertheless, as the Hoosier Poet he received several honorary college degrees, including one from Yale University.  In 1915, the National Commissioner of Education directed that his birthday would be celebrated in all schools in the United States.

He was the “Children’s Poet.”  Woven through the lines of his verse were endless summer days of childhood, textured with pixie people, puppy dogs, and Circus Day Parades.  He wrote, too, of autumn leaves, jack-o-lanterns, harvest moons, and ghost stories.  In his childhood in Greenfield, an orphan girl named Mary Alice Smith was hired to help with chores in exchange for room and board.  Called “Allie” for her middle name, she often entertained the children around the kitchen fire with stories of fairies and goblins.   Years later, Riley’s fond memories of those days led him to send his publisher a poem titled “Little Orphant Allie.”  A typesetter misread his handwriting and turned “Allie” into “Annie.“  Riley caught the error too late, and Allie has been Annie ever since.  Mary Alice moved to the village of Philadelphia on Highway 40 in Hancock County.  Her tombstone in the little cemetery there bears a verse from the poem which honored her:  “Little Orphant Annie’s come to our house to stay, to wash the cups and saucers up, and brush the crumbs away.”

Unlike many poets whose glory is posthumous, Riley was a legend in his own time.  He was blessed with the love and adulation of an adoring public right up to his death in 1916 at the age of 66.  He died at home in Indianapolis on his beloved Lockerbie Street (“Such a dear little street it is, nestled away, from the noise of the city and the heat of the day.”)  More than 35,000 people filed past his casket as it lay in state under the dome at the Indiana State Capitol.  President Woodrow Wilson sent a note to the family which hailed the poet as “a man who imparted joyful pleasure and a thoughtful view of many things that other men would have missed.”  As a memorial, friends raised funds for a children’s hospital.  The Riley Hospital for Children opened its doors in 1924 on the poet’s birthday.  It has since become one of the largest and best in the nation.

In summing up his own talent, Riley once said, “I never represent people as the scholars think they ought to think and feel.  I never try to edit nature.  Nature is good enough for God, and it’s good enough for me.”

He was the year-round interpreter of nature.  When the bumblebee buzzes in the garden, when snowflakes create delightful designs, when spring brings flowers of joy, and yes, when the frost is on the pumpkin,  it's only natural for Hoosiers to remember James Whitcomb Riley, their 19th Century Superstar. 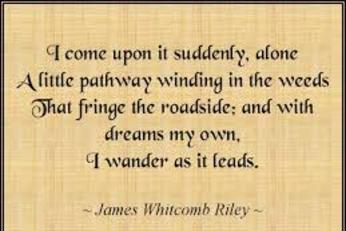 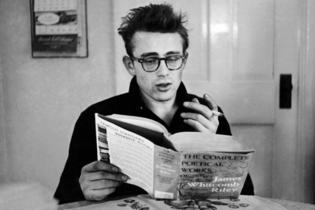 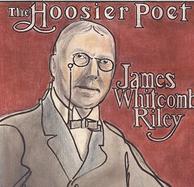 Another Superstar from Indiana, James Dean, enjoys the Hoosier Poet