You could walk down the sidewalk on a summer evening and not miss a minute of the fun at the Fresh Air Taxi Company, which Amos operated.  You could hear the show coming through every open window (those were the days before central air.)

During the 1930s, movie theaters advertised that they would stop the show at 7 p.m. each evening and pipe the program through the auditorium.  That’s how popular “Amos and Andy” was.

Although there are more radios and radio stations now than ever before, the medium’s role is much different from what it was before television took over.  Young people today perhaps do not realize was once something more than a transistorized jukebox.  They might like to visit an exhibit at the Indiana State Museum.  It’s dedicated to radio’s history.

“A fiery horse, a cloud of dust and a hearty Hi-Yo Silver!  The Lone Ranger rides again!”  If strains of the William Tell Overture are now echoing in your head, you’re old enough to remember radio.

Those were the days when a person had to have an imagination.  The radio provided the words, but you had to paint the picture.  Each member of the family had favorite shows.  For Dad, it was “Boston Blackie,” “Sam Spade,” and “Gangbusters.”  Mom liked “Ma Perkins,” “Mary Margaret McBride,” and “The Romance of Helen Trent.”  The kids went for “The Lone Ranger,” “Captain Midnight,” and “Jack Armstrong, the All-American Boy.”

For music, you turned to Bing Crosby, Kate Smith, Rudy Vallee, or Kay Kyser and his Kollege of Musical Knowledge.  If you wanted to laugh, you tuned in to Jack Benny, Fred Allen, Fibber McGee or the Great Gildersleeve.  If you wanted to learn something, you caught the “Quiz Kids” or “March of Time.”

If you wanted to be scared out of  your wits, you turned off the lights and listened to “Suspense” or “The Inner Sanctum Mysteries” (with the spine-chilling creaking door.)

There was also Lum and Abner and Smilin’ Ed and Charlie McCarthy.  These shows gained huge audiences during the Depression when radio offered the only entertainment people could afford.  Radio was everybody’s court jester, adviser, teacher, and perhaps, like Boston Blackie, a friend to those who had no friends.

There were many local personalities on Indianapolis radio, including Carolyn Churchman on WFBM, Country Cousin Chickie on WIBC, and Uncle Wally Nehrling on WIRE.  All the kids loved hearing Uncle Wally read the "funny papers"on the air.

On display at the Indiana State Museum are the old crystal sets, horn speakers, and imposing wood consoles that once occupied center stage in America’s living rooms.  Large, box-shaped microphones, a wind machine (for sound effects) and a clacking teletype machine take you back to the birth of the electronic revolution.  There’s a replica of an old control room and photographs of many Hoosiers who helped pioneer the “wireless.”

There are many folk today who have fond memories of sitting up late, twisting the dials, hoping to catch a distant signal out of the ether.  There were nearby stations such as WFBM and WIRE.  It wasn’t unusual to get Fort Wayne (WOWO) and Cincinnati (WLW), but it was quite a coup when you heard St. Louis (KMOX) or Nashville (WSM) or the granddaddy of them all, KDKA in Pittsburgh.  What a thrill it must have been to a farm family in Johnson County the first time they heard a box that drew voices and music out of the air.

Radio is still an important medium.  It has proven to be durable, remaining popular even against the onslaught of television, video recorders, computer games, compact discs, and the internet.  It’s found everywhere and provides fast information and congenial programs.  But it doesn’t have the personality if used to have.  That was left at places like 79 Wistful Vista and the Knights of the Sea Lodge Hall.  Their echoes can be heard at the Indiana State Museum, commemorating those “thrilling days of yesteryear.” 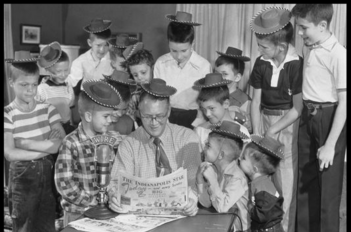 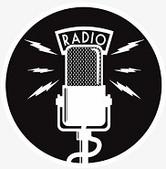 "Uncle Wally" Nehrling had many young fans who loved to hear him read the "funny papers" on WIRE.