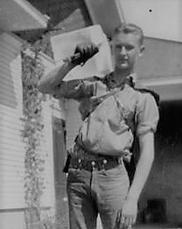 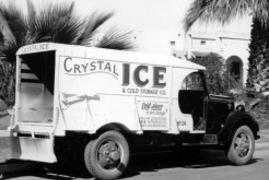 and in August it's none too soon

"Hot enough for you?"

When the heat index sizzles above the 100 mark, the answer has to be "Oh, yeah."

Most of us, however, can't complain.  As the thermometer boils, we are never far away from an air-conditioned sanctuary at home or work.  We are lucky.  It wasn't long ago that "the good old summertime" demanded a variety of survival techniques.  Those were the days when shade trees and cool breezes were thoroughly appreciated.

It was the era of the iceman.  This stalwart individual made the rounds of the neighborhood, delivering huge blocks of ice that made the family icebox live up to its name.   He was a hero to children on hot summer days.  When the iceman came around, games of hop-scotch,  hide-and-seek, and backlot baseball were quickly suspended.  He didn't mind taking a moment to chip off a small chunk or two for barefoot kids.   For pure and simple refreshment on a blazing afternoon, nothing could match the drippy delight of a spike of ice from the iceman's wagon.

Those were the great days of the hand-held fan.  These wonderful little devices, constructed of light cardboard with a wooden handle, were indispensable in the dog days of July and August.  No church pew was without one.   They were as necessary as the hymnal.

Many homes of the by-gone era were architecturally designed to allow for hot weather.  They possessed high ceilings and wonderfully-tall windows that took full advantage of every little breeze.   Many larger homes had a separate building called the "summer kitchen."  This is where the meals were fixed on days when using the usual kitchen would have made the house uncomfortably hot.

The worst part of hot weather was trying to sleep at night.  On sticky nights when the air was so "close" it hung heavy over the bed, many an insomniac of years gone by  carried his pillow to the front porch.  If there was no front porch, there was competition for sleeping spots in front of the screen door.

Another method of cooling off was to "take a ride."   The whole family would pile into the carriage, or Model T, or Buick, and breeze off into the countryside, windows wide open and sometimes heads hanging out.

There were a lot more picnics and outdoor get-togethers in those super-heated days of yore.  Maybe it was because misery loves company or, more likely,  he taste of  freshly made ice cream, frosty and creamy, scooped (or licked) right off the freezer paddle.  Also highly desirable were tall tumblers of fresh-squeezed lemonade, with flakes of pulp and maybe even a seed or two floating among the mini-icebergs of the frost-covered glass.

The electric fan came along almost as soon as the electric motor was invented.  It constituted "high tech" cooling for most of the first half of the twentieth century.  The oscillator model with its intricate metal grille became a welcome addition to most homes and businesses.  There were window fans, too.  They were made to blow in both directions.  Two schools of thought surrounded the window fan.  One camp held that the fan should blow outward, so that the hot air was sucked out of the room.  The other side opted for the reverse flow of air, so that the "cool" air outside should be brought into the room.  As far as we know, the argument was never resolved and even today window fans continue to blow either way, depending upon local family beliefs and traditions.

Of course, fans can only do so much.  They can move the air around, but  they don't do much to improve the quality of that air.  It took Willis Carrier to do that.  Called the "pioneer of modern air conditioning," he received a patent in 1906 for an "apparatus for treating air."   The first public place to get the apparatus was Hudson's Department Store in Detroit.  Crowds who went there in 1924 loved the idea of two-handed shopping, since the fan hand had been freed by Mr. Carrier.

Movie theaters jumped on the breeze wagon right away.   The Rivioli in New York City was the first to hang a banner on the marquee which read "Cool Comfort."  Whatever else the marquee might have said didn't matter on a hot summer day.   Most people didn't care what movie was showing.  In 90-degree heat, slapstick, melodrama, westerns, and newsreels were equally enjoyable in the cool dark cavern of the theater.

It was only a matter of time before air conditioning moved into homes and workplaces everywhere.  Now we it take it for granted.   When the heat index rises, we don't get hot and bothered.  We simply adjust the thermostat and keep our cool.