I want a great shake! 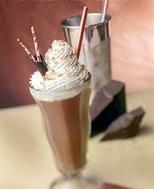 I Don't Want a Fair Shake

Modern purveyors of fast food have tried to pull a fast one, but I haven't been fooled for a minute.  Not for one bubbly, creamy, little chunks of ice cream, sip through the straw, malted milk minute.

I'm talking about what they're passing off for "milkshakes" today.  The modern milkshake dribbles out of a machine.  It clumps into a paper cup.  It's a gritty mass that must be eaten with a spoon.  Sometimes it's not even very cold.

Some "milkshakes" have come so far from their origins that they're now labeled "non-dairy."  It's time someone spoke up against this erosion of a vital element in our dietary heritage.  As Ogden Nash once said, "Progress was all right once, but now it's gone too far."

Today's kids have probably been duped into thinking that the glumpy stuff they get is a real "shake."  They have my pity.  They may be whiz-kids at the video games and they probably know more about computers that I do, but I know what a milkshake is.

First of all, a real milkshake has to have bubbles.  The bubbles prove that the milk has been "shaken."  Why do you think they call it a milkshake in the first place?

A real milkshake must be mixed in a metal container.  Ideally, it will be blended into magic by a wonderful Multi-Mix machine, the kind that Ray Kroc was selling when he met the McDonald Brothers in San Bernadino, California, and learned about their theory of selling hot hamburgers fast.  Wait...that's another story.  Let's get back to milkshakes.

As the foamy froth spins and spumes, the metal can will become frost-covered.  There will be a couple of streams of creamy nectar dribbling down the side.

A real milkshake should be served straight from the can.  Any soda-jerk worth his shake will pour the first glass for you, and then leave the can for you to finish.

There will be millions of bubbles in this milkshake.  If a spoon is necessary, there is probably something amiss.  The only time you would possibly use a spoon is when a portion of the ice cream has not been thoroughly blended.  Small chunks like these are acceptable.  As you drink the shake, you can look forward to the little clumps of ice cream as "desserts" that you can jab and mash with your straw.

The milkshake should be ice cold.  It should taste creamy and milky.  I would almost say that it should taste chocalaty, too, but I don't want to offend connoisseurs of strawberry and vanilla shakes.  My opinion is that the only true milkshake is a chocolate milkshake.  I know that's a personal bias.  I also know that a person's preference in milkshake flavors is a clue to his personality.  But that's another essay.

A final note:  A real milkshake should be "slurped" at the end.  Not even one drop should be left at the bottom of the glass.

I can't tell you where you'll find real milkshakes being served these days.  There may be a few of those drugstore soda fountains out there someplace.  Maybe there's a small "mom and pop" malt shop still in existence.  But I suspect that the authentic shakes are gone forever.  They take too much human effort and they make a little too much of a mess.  They've been sacrificed at the altar of speed and convenience.  I'm afraid the assembly-line versions are here for good.  Well, maybe they're here, but they're not very good.

Into the container must go a generous helping of ice cream, but not so much that the shake will be too thick to drink through a straw.  The blending process is crucial and takes tender loving care.  A little is added at first.  Additional amounts are added as the mixture is magically combined by the milkshake machine.  This noble device was the centerpiece of many a drugstore soda fountain in the days of my youth.