In James Hilton’s Goodbye Mr. Chips, someone says to the professor: “I should think that you would never grow old in a world where everyone is young.”

That’s an interesting concept, but many teachers might find reason to argue with it as they notice their hair growing gray at an accelerating rate.  Working with teenagers on a daily basis may be hazardous to your health, but most teachers will agree that the profession may indeed keep you young “in spirit” (whatever that might mean.)

It’s a fact that you will survive a little longer around the kids if you can manage to be a little more “hip” than the average member of the over-the-hill gang.

I have been pleasantly surprised lately to learn that high school kids have developed a certain reverence for the 1950s.  Now this is something I can relate to.  I did my growing up in the 50s.  I can still identify the year and make of most of the cars produced during the period.  I had my share of cherry cokes and malts at the drugstore, and I was known to frequent more than one sock hop.

I didn’t realize at the time that I was growing up in a period that a future generation would look back on with nostalgia.

A student once asked me how it felt to live in the early rock-and-roll era.  I told him if I had known it was going to be an era, I would have paid more attention.

Hey, it was pretty wonderful, though.  I guess they were the future “good old days.”  The “era” has been glorified on the screen in a lot of movies.  “American Graffiti” and “Grease” have become classics.  TV’s “Happy Days” brought the 50s into every living room.

I once conducted an informal survey of 16-year-olds.  I asked them to write down some of their impressions of the 1950s.  Mentioned most often were poodle skirts, peaceful times, Elvis, bobby socks, car-hops, drive-in theaters, hot rods, jukeboxes, and rock-and-roll.

Rock-and-roll seems to be the centerpiece of the whole thing. I have met teens who know more about 50s and 60s music than I do.  They can tell you all about teeny-boppers, the twist, the limbo, and Dick Clark.  They are trivia buffs when it comes to Buddy Holly, Bill Haley, Brenda Lee, Roy Orbison, Bobby Vee, and, of course, the Beatles.  When I express some knowledge of the subject, I even get the feeling sometimes that they think I’m not such an old fogey, after all.

I made a good impression the other day when a young lady asked me about a group called the “Penguins.”  Somewhere back in the dust bin of my mind, I was able to retrieve the title of their one and only hit.  Believe me, that earned me a few points with the younger generation.  In case you don’t recall, it was “Earth Angel” (1958.)

I’m glad that the kids think the 50s were “neat.”  It gives us a bond.  I won’t burst their bubble by telling them that life then was much like now:  days, weeks, months, and years with highs and lows, triumphs and troubles, all overshadowed by an uncertainty of the future.  I won’t tell them about air-raid drills, polio, and racial unrest.

Let them have their “Camelot.”  They could do worse.  Maybe the 50s really were more “innocent” years.  The country had not been shocked by assassinations or divided by Vietnam or demoralized by Watergate.  These were the years when “Made in Japan” meant cheap trinkets and gasoline was 18 cents a gallon.  The cars were big and dreams were bigger.

I’m glad I grew up there.  I’m glad the youngsters of today appreciate “my” era.  Come to think of it:  they were pretty happy days, after all. 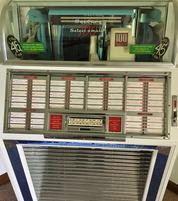 Maybe the kids are right....