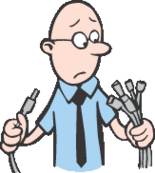 First Visit to the Computer Store

I’ve always been a buttons and switches type of guy.  I love gadgets.  Put some knobs, meters, and little red lights on a shoebox and I’ll take it home with me.  I was the first kid in my school to get an audio tape recorder.  A VCR was up and running in our house before most people knew what one was.

I held back, though, when it came to computers.   I wasn’t aboard the first flight into cyberspace.   I wanted no bugs or glitches.  All systems had to be “go” before I launched onto the Internet.

Recently I decided that maybe the “shakedown” period was over.  I figured that computers must have reached a reasonable degree of perfection. After all, isn’t just about everyone on the bandwagon,  talking about hard drives and fax-modems and MMX technology?  Even my young nieces and nephews have become experts at surfing the net and exchanging e-mail.

So I decided to get on board.   I confidently marched  into a computer store and became confused almost immediately.   The salesman  spoke a strange language, composed primarily of abbreviations and statistics.  In a daze, I selected a model  he proudly announced was a 233 MHz with 32 Mb of EDO, K56Flex, 32K primary cache with 256K of pipeline burst cache.  That last figure impressed me, although I had no idea what it or any of the other numbers represented.   And,  yes, my  model had Windows 95.  I wasn’t too sure what that was, but I knew Bill Gates had invented it and he was very rich.

“You’ll need a printer,” the salesman said.  Well, if you say so, I thought.  So I selected a printer.

“Will you need a printer cable?” inquired the salesman.

“To connect your printer to your computer,” he said.

I was having serious reservations about the current status of the computer revolution.  You mean they don’t know which cable to pack with the printer?

That cable fit just fine.   Getting things to run, however, was another ballgame.  The trouble started in the very first inning when I wanted to test the printer.  I was careful to buy equipment all made by the same manufacturer.   That didn’t seem to make much difference, though.  An early dark omen was the set of diskettes which had to be used to “install” the printer.  There were many complicated steps involved.  I thought I had followed all directions, but the monitor screen consistently complained that the computer was not “communicating” with the printer.  I fiddled with things for about an hour.  Then I remembered the “help” telephone number the salesman had told me about.  A call  took me to Dallas, Texas, and  put me on hold for 25 minutes.  A weary voice finally came on the line.  I explained that I was hooking up a printer to my computer.

“Stay with me,” he said reassuringly. “I’ll be with you through this whole thing.”

Good grief, I thought.  Are we performing surgery?

He was right.  He stayed with me through numerous clicks and screen changes and strange incantations of inserted numerals and letters.  Forty-five minutes later, the printer was happily scanning back and forth, demonstrating its test sheet.  My toll-free friend and I were both bushed.

When you call the “help” number, the person on the other ends begins by asking you your first name.  That’s good.  You’ll be on a first-name basis before the conversation is over.  In a dozen or so subsequent calls, I have learned a lot about my computer.  I have performed dazzling electronic sleight-of-hand.  I was a bit shaken one night when the machine refused to shut down.  The little hour-glass symbol desperately rolled over and over and over.  A call to the home office found a confident voice who knew all about this little bug.  After a series of delicate adjustments performed by me and my mouse, the computer contentedly slipped off to sleep.

I have learned that a new computer isn’t new very long.  Last week a new Internet Browser was introduced, making mine the “older” version.  My model, after all, was produced all the way back in July.  I also understand that Mr. Gates is about to introduce “Windows 98.”  And I hear that there’s a new way of making chips now that will provide a lot more memory.  That’s OK.  Let the revolution continue.  I’ve got plenty of MHz, an ample supply of MMX , more pipeline burst cache than I know what to do with, and  my long-distance friend in Dallas.  That’s all in addition to a printer cable that’s good for at least twenty years.