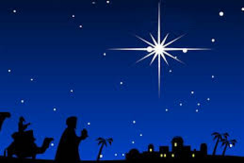 Listen!  Do you hear it?  It's the thundering crescendo of the growing quiet.

The ringing of the cash registers has ceased.  The blaring commercials have retreated.

The merchants have quit their hawking of wares.  The barkers have been stilled, for a while at least.

The malls are cleared.  Their parking lots are nearly empty.  The streets are relieved of their burden of bumper-to-bumper horns in full blast.

A hush is settling over city and countryside.

All is calm, all is bright.

It is Christmas Eve.

It's Christmas Eve, the most magical night of the year.

This is the quiet time.  In the air is an aura of expectation and excitement.

Christmas Eve conjures up memories of lying awake, listening for Santa.  Christmas Eve is when visions of sugarplums dance in your head.  It's the longest night of the year for kids, and the shortest for parents.

When I was a child, Christmas Eve was a hurdle that had to be overcome.  We couldn't open presents until Christmas morning, so the night before us was something to be wished away.  Now, years later, after I have unwrapped all of those toys and games and eaten all of the candy and oranges, I realize that the essence of the pleasure lay not in the clamor of Christmas morning but in the enchanted expectation of Christmas Eve.

For a few hours on Christmas Eve, the world is a different place.

The stores have closed early.  The offices and factories have quit at noon.  People are at home.  The universe is still and dark, save for the glistening of multitudes of twinkling lights in trees and windows.

Step outside.  The air is crisp.  The stars are bright.  Stray away from the crowd.  Gaze heavenward.  Soak up the solitude.  Feast upon the magnitude.

The stars will transport you through time and space.

Above thy deep and dreamless sleep, the silent stars go by.

It's Christmas Eve.  The shopping is over.  The names are crossed off the list.  The cards have been sent.  The presents are wrapped and under the tree.

The turkey is ready for the oven.  The rolls are rising.  The guest list is complete.

The work is done.  It's time to take a breather.  That's what Christmas Eve is.  A respite in a rushing world.

Listen to the silence.  Hear the expectation.

The herald angels sing, glory to the newborn king,

Peace on earth and mercy mild, God and sinners reconciled.