Carl Fisher, the man who made Florida cool 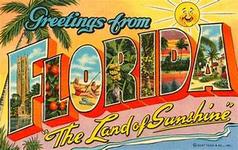 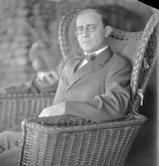 It’s a cold Indiana day in January.  Do you know where your neighbors are?

Yes, it seems that more and more of our friends and relatives are fleeing south each year for the winter.   While the rest of us are scraping windshields and shoveling driveways, they are picking oranges and driving golf carts.

It is estimated that Florida is home to one million more people in January than in July.  Anne Murray sang  about it:  "Little snowbird take me with you when you go, to that land of gentle breezes where the peaceful waters flow."

Hoosier “snowbirds”  begin their southern migration sometime around Halloween.  You won't find back them on the clay soil of Indiana until well after Easter.  Born to weather frigid Indiana winters, they now shiver in any temperature below 55.  They have given away their heavy winter coats and no longer have any use for a snow shovel.

Speaking of snow shovels, there is one on prominent display in the grassy front yard of a home near my brother Bob's place in Fort Myers.  Painted in red letters on the shovel are the poignant words, "Rust in Peace."

I don’t want to say that Bob and his fellow Hoosier Floridians like to rub it in, but they do seem to spend a good deal of time watching the Weather Channel.  They follow (with glee, I think) the big blue blobs that surge on the radar over Indiana, signifying freezing rain and snow.  Meanwhile, they fish in the ocean, stroll the beach, play shuffleboard, or just relax in white wicker chairs on the patio.

“Wintering” in Florida is a well-established tradition for sun-seeking Hoosiers.   It's a practice with solid Indiana roots, made possible in a large part by a colorful Hoosier entrepreneur nearly a century ago.

By the time he became known as "Mr. Miami Beach," Carl G. Fisher had already found huge success in a variety of enterprises.  Locally, he is best known as one of the founders of the Indianapolis Motor Speedway.

Fisher had a genius for business and a flamboyant flair for promotion.  One of his most elaborate stunts involved his Fisher Automobile Company in Indianapolis, probably the nation's first car dealership.  The firm sold several name brand cars of the day, including Oldsmobile, Packard, Stutz, and Stoddard-Dayton.

On one clear day, Fisher attached a hot air balloon to a beautiful white Stoddard-Dayton sedan.  Thousands of people watched in awe as the car floated over the city.  They later observed Fisher driving the car in triumph back into the city.  "The Stoddard-Dayton was the first automobile to fly over Indianapolis," he said in his advertising.  "It should be your first automobile, too."

What the public did not know is that Fisher had removed the engine from the car to lighten its weight.  Meanwhile, there were several identical white Stoddard-Daytons positioned throughout the city to facilitate his triumphant return.

It was with this type of salesmanship that Fisher promoted all things automotive.  The roads were terrible in those days, and he developed the Lincoln Highway, a well-paved east-west route across the country.  He then turned his attention to a north-south route, establishing the Dixie Highway from Michigan to Florida.

When he got his highway to Florida, Fisher applied his promotional ingenuity to real estate. He turned 3,500 acres of mangrove swamp into a place called Miami Beach, making millions in profit.  Humorist Will Rogers quipped, "Fisher was the first man to discover that there was sand under the water that could hold up a real estate sign."

True to his marketing genius, Fisher hired a baby elephant named Rosie to promote his Florida projects.  Rosie was photographed serving as a golf caddy for vacationing President Warren G. Harding.  Billboards across the country displayed bathing beauties at white beaches with blue ocean waters.  Fisher's magic worked again, and soon the world was aware of the beautiful land known as Florida.

Carl Fisher made millions, but, like many others, lost everything in the stock market crash.  He died in 1939 and is buried at Crown Hill Cemetery in Indianapolis.

Today, as Indiana snowbirds enjoy a warm, southern January, it might be fitting for them to tap their orange juice glasses in a toast to the fellow Hoosier who helped blaze their sunny trail to Florida.