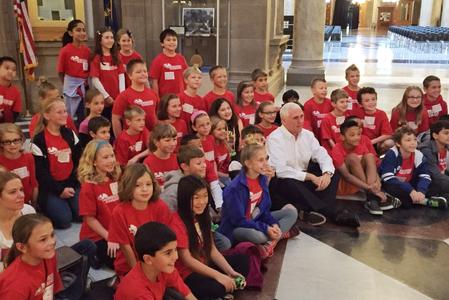 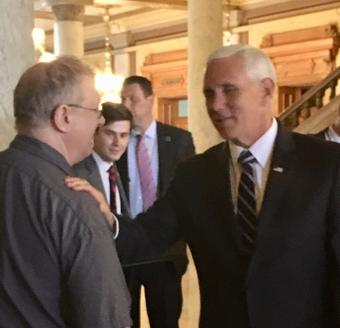 When he was Governor of Indiana, Mike Pence loved to stop and talk to fourth-graders on field trips to the Indiana Statehouse.  Usually running late as he passed by the rotunda, he still could not resist the chance to see their little faces.  He would sit on the marble floor with them as their teachers and parents snapped pictures with cell phones.  Of course, he would take questions.

“How do you like being the governor?” one little girl asked.

“I love it,” he smiled, “mainly because I get a chance to talk to you and help make a difference.”

“Do you ever make a mistake?” another child queried.

Everyone laughed as he made a quick exit and headed to another meeting someplace.

Mike loved the Statehouse, a classical old building which opened in 1888.  Its sturdy walls of Indiana limestone, handsome marble pillars, and heavy brass chandeliers create a feeling of permanence in a rocky world.  Mike had been a history major at Hanover College in southern Indiana.  He went to law school, too, but inside he was a history kind of guy.  During his 12 years in the United States Congress, he delighted in giving tours of the Capitol Building.  When he moved into the Statehouse, members of the tour office made him an official tour guide, complete with nametag.

He might have been a little surprised as he got rolling as governor. He discovered he did not have much time to stroll visitors down the halls of the Statehouse.  He may not have given complete tours, but he seldom failed to stop and talk to folks he met in the marble hallways as he went to and from his office.  Many a casual visitor left the building with a selfie taken with the state chief executive.  Many of those selfies probably have been revisited now that Mike is Vice President of the United States.

He loved the large governor’s office.  He liked to bask in the history of the space and talk about the men who had occupied the place before him.  The office is lined with portraits of former governors and other important people from Indiana history.  As he liked to tell visitors, he felt surrounded by a cloud of witnesses.  He brought to the Statehouse a framed photograph that he had kept in his office in the nation’s capital.  It was a picture of a much younger Mike Pence (long before the white hair.)  The youthful Mike is wide-eyed next to President Ronald Reagan.  The young Republican had met the considerably older Republican in a meeting in the oval office.  Mike showed the photograph to anyone who came to his office.  He loved to describe the awe that he felt that day.

Another thing in the governor’s office that visitors would notice was always open on the corner of his desk.  It was the Holy Bible.   It was more than an ornament.  It was well used.

One of Mike’s favorite duties as Indiana Governor came in December at an event called “tree trim.”  That’s when large live Christmas trees would light up the rotunda.  School buses brought hundreds of kids who came to help make tree ornaments.  When the work was done, Mike would repeat a tradition he had started years ago with his own children.  He would sit down and read aloud to the kids “'Twas the Night Before Christmas.”

Mike was back in the Statehouse recently.  It has been well over three years since he had departed the Governor’s Office.  This time he came in with an entourage of Secret Service agents.  He was running late, as usual.  However, it was still Mike.  He veered out of the straight line being plotted for him to steer over to the tour desk to greet familiar faces and shake hands with folks passing through.  He took time to visit for a few seconds with Ned, long-time member of the staff who has spent years setting up and taking down chairs for events in the building.  Mike is the kind of guy who appreciates people like Ned.  After all, keeping the beautiful Statehouse in order is noble work, the kind of thing Mike Pence understands.

Photos from the favorite parts of Governor Mike's job