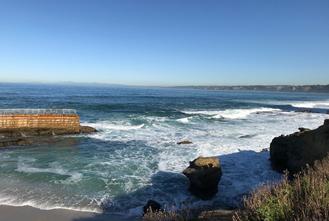 ​The sun is just coming up.  Its resplendent golden rays are spreading across the sky, shimmering on the dark blue water of the Pacific Ocean, illuminating the foamy surf as it plunges onto the beach.

The air is a refreshing blend of the warmth of the coast and the chill of the sea, spiced with the fragrance of bougainvillea.   As I stroll along the shore, my brain is on break.  My thoughts rise and fall with the waves, wafting from palm tree to sand to sky like the white seagulls that surround me.

It’s the start of another day on vacation in San Diego.  My path is only a few steps from the door of our motel.  I relish the chance to catch the beauty of the shore before the crowd arrives.

There are a few others about, but they keep to themselves.  They realize that anyone walking the beach at this hour wants to commune with nature and not with fellow men.  That’s why I am a little surprised when a man in a tropical shirt approaches me.

I glance at my wrist, which 51 weeks a year sports a watch.  There is nothing there at this moment except a round, pale silhouette which marks the spot where a Seiko usually resides.

The man smiles and says, “Thanks, anyway.”

I am a bit perplexed.  I think of the old song by Chicago:  “Does Anybody Really Know What Time It Is?”

This is strange.  Me?  Not knowing what time it is?

I must really be on vacation.  I am the guy who back home has one of those atomic clocks.  I set my watch to it.  On a non-vacation day, I am never far away from the exact time.

I am not alone.  Most of us these days are obsessed with time.  We have clocks in every room.  There are wall clocks, mantle clocks, desk clocks, alarm clocks, anniversary clocks and even talking clocks.  There are grandfather clocks that solemnly chime each quarter hour.   There are tower clocks that formally keep the hour for the whole neighborhood.  Cuckoo clocks crazily announce the hour.  And nowadays there are digital clocks built into just about everything.

The United States government takes time seriously.  There are two official agencies that calibrate the minutes and seconds with scientific accuracy.  The National Institute of Standards and Technology and the U.S. Naval Observatory both keep the official time.  They never differ by more than .0000001 second.  I guess that’s close enough for government work.

It’s important, of course, that we all agree on what time it is.  We don’t want to be late for work or school.  We don’t want to miss overtures and opening pitches.   We want to catch Jay Leno’s opening monologue and get to movies early enough to avoid squeezing our way over knees and feet.

But perhaps we have carried timekeeping a bit too far.  Do we really need to be aware of each passing second?  The sun would rise and set in the same splendor even if we did not hourly chart its movement.  Roses would burst into flower without a timepiece anywhere in sight.  The tide would still rush to shore, boys and girls would still fall in love, and birds would still take to flight.

William Faulkner wrote, “Time is dead as long as it is being ticked off by little wheels.  Only when the clock stops does time come to life.”

Let the man in the tropical shirt look to someone else for the hour of the clock.   School bells will order my life soon enough.  In the meantime,  the sun and the tide are all I need to know about time.