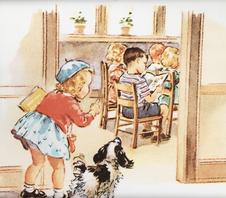 Dick and Jane introduced me to a world outside of my own.  There were Mother and Father and sister Sally.  Spot was their dog, of course, and Puff was their little yellow kitten.
I'll bet many of you remember Dick and Jane.  They introduced millions to the wonderful world of the printed word.

Happy memories of reading about their world

There they were on the cover:  Dick, Jane, and Spot chasing a toy airplane.  I picked up the old book and flipped through the pages.  The pictures brought back a flood of memories:  my old wooden desk with the large drawer at the bottom and the ink well on top:  the smell of chalk dust mixed with that of the cloakroom on a rainy day;  the excitement of learning how to read.
I bought the book, of course,  How could I turn my back on such an important part of my past?
Maybe I led a sheltered life, but I don't recall knowing much about the world until I met Dick and Jane.  I made their acquaintance in the first grade.  I still remember as though it were yesterday.
The very first story I ever read was titled "See It Go."  It was the cover  story.  "Look," said Dick.  "See it go.  See it go up."

It went up.  Jane saw it.  Sally saw it.  Spot chased it.  The excitement reached its climax when the plane knocked father's hat off.  Pretty exciting stuff to a first-grader who had never seen a television set. 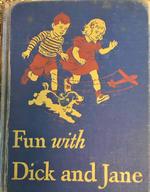 ​           Remember "A Funny Ride" when the kids accompanied Father to the service station?  The car was put on the lift and Spot and Puff stayed on board as the car was elevated.  They had to be rescued along with Tim (Sally's teddy bear.)
Dick and Jane had wonderful grandparents who lived on a farm.  They had many enjoyable visits.  One time they came home with a baby duck.  He was named Little Quack.  He was the subject of concern in one story.  He did not want to play or eat.  He just sat and sat and sat.  Suddenly a thunderstorm arose.  Jane said, "Oh, Dick!  Look up!  Look up!  We must run to the house.  We must run fast!"
Dick and Jane ran.  Spot and Puff ran, too.  But Little Quack did not run.  When the storm was over, Dick and Jane found the baby duck floating happily in a puddle.  And there Little Quack sat and sat and sat.
At the end of the book, Dick and Jane are waving goodbye to Mother and Sally and Spot.  Sally said, "Oh, Spot.  Dick and Jane went to school.  They have friends at school.  They have fun with friends.  They work and play at school."
"Bow-wow," said Spot.
Painstakingly printed inside the cover of my old book are the names of the students to whom it was loaned each year.  Marilyn Maltman, Joe Schultz, Debbie A., Mike, Lonna, Larry.
Where are Joe and Mike and Lonna today?  Do they remember Dick and Jane?  I hope their memories are as fond as mine.  I hope that school was as good to them as it was to me.  I hope they had fun with Dick and Jane.

Recently I came across an old friend I hadn't seen in over 60 years.

It was at a flea market and I was browsing through a book stall.  I had just examined a well-worn copy of "Tom Swift" when I saw it, lying beside an old spelling book.  It was faded and there were loose threads in the binding and the corners were rounded, but there was no doubt.  It was my old friend:  "Fun With Dick and Jane."

I Had Fun with Dick and Jane 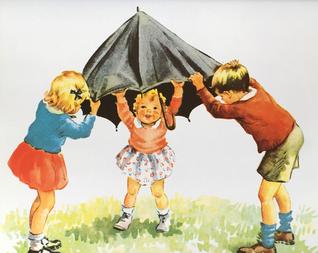