1.  Which President was in the White House when electricity was first installed?

2. Which President ordered United States flags to be flown over schools and government buildings?

3.  Which President was in office when the Pledge of Allegiance was adopted?

4.  Who was the first President to put up a Christmas tree in the White House?

5.  Who was the last President to wear a beard?

6.  Who was called the “Centennial President” because he took office 100 years after George Washington?

7.  Who is the only President to be succeeded by the same man he replaced?

8.  During whose term did six states enter the Union, the largest number for any President?

9.  Who was the only President who could say that his grandfather had also been chief executive?

10.  Whose home is, according to historian Richard Norton Smith, “One of the most impressive inside of all the Presidents’ homes”?

11.  Which future President led the 70th Indiana Regiment in the Civil War and earned a battlefield promotion to Brigadier General?

12.  Which President spent his whole adult life in Indianapolis, living on North Delaware Street before and after serving his term in the White House?

Ready for the answers?  Actually, there is one correct answer for all twelve questions. It is Benjamin Harrison, the 23rd President of the United States and the only man from Indiana to live in the White House.  His grandfather was William Henry Harrison, our 9th President.  Benjamin’s great-grandfather had served as governor of Virginia and was a signer of the Declaration of Independence.

Benjamin Harrison was born in Ohio and graduated from Miami University at Oxford. As a young attorney, he moved to Indianapolis and developed a thriving practice. During the Civil War, he led the 70th Indiana Regiment.  Later he served a term as United States Senator.

In 1888, he was nominated by the Republican party to oppose President Grover Cleveland in his bid for re-election.  Harrison lost the popular vote by a narrow margin but won easily in the electoral college.  In the White House, he served the people with honesty and conscientious hard work.  Caroline, his beloved wife of 39 years, was seriously ill when he mounted a half-hearted bid for re-election.  Two weeks after she died from tuberculosis, he lost the election to Cleveland, who returned to the executive mansion to become the only man to serve two non-consecutive terms. 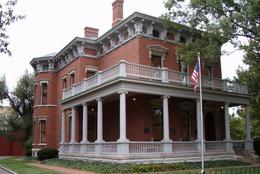 This is the best type of quiz, the kind all kids wish their teachers would give in school.  The following questions all have the same answer.

Now, isn't this going to be easy?

That includes Indianapolis school children who get a chance to experience what life was like in a 19th century home that Historian Richard Norton Smith describes as “almost a stage set for Victorian America.”

The home is located at 1230 N. Delaware and is open Monday through Saturday. Tours begin each half-hour from 10:00 am until 3:30 pm.  A visit to the Benjamin Harrison home allows entry to an elegant home with tall ceilings, exquisite furnishings, and a spiral staircase.  It also provides a real-life history lesson about a man who is called “Indiana’s First Citizen.”

After leaving office in 1893, Harrison returned home to the lovely Italianate brick home he and Caroline had built on North Delaware Street in 1875.  It was there that he died in 1901.  The home, a National Historic Landmark, is now a museum and a focal point for a variety of social and educational gatherings throughout the year.  Over 30,000 people tour the home each year.


Return To The Table of Contents
View on Mobile