Tall plumes of steam puffed from calliope pipes as the tune of "Oh, Susannah" announced the arrival of the Showboat "Majestic" in Madison.  Decked in brilliant crimson and cream, there was no mistaking the fact that the floating theater was operated by Indiana University.

It was just another reason to love a river city in those wonderful summer days 50 years ago.  What fun it must have been for IU drama students to spend warm days churning up and down the Ohio and Mississippi rivers, entertaining audiences in a style river towns had known a century before.

How lucky for me, too, to get to spend a year in Madison.  Just out of my teens, I was working at the local radio station and had a furnished room in an old Victorian home just across the street from the J. F. D. Lanier Mansion.  Surrounded by the history and charm of the old city, I made the most of it.

My parents and brothers came to town that August day.  The showboat docked in the afternoon, and in the early evening a calliope concert brought the crowd to the river. We walked down to the bank and stepped onto the Majestic, festooned with strings of electric lights, gently rolling from side to side in the water.

The play was "Arsenic and Old Lace."  For those unfamiliar with this classic dark comedy, the story involves two elderly sisters who have an extra room for rent.  Lonely old men who apply are sometimes kindly offered a poison concoction of elderberry wine.  Their eccentric  nephew, who thinks he is Teddy Roosevelt, cheerfully buries the gentlemen in the locks of the Panama Canal, which he is building in the basement.

To "Teddy," the staircase was San Juan Hill.  At several points in the play, he yelled "Charge!" and dashed up the steps.  The showboat rocked in the water a full minute each time he stomped up those stairs.

Recently I did some research on the Majestic.   The boat was built in Pittsburgh in 1924 and was a successful traveling playhouse for three decades.  When it was put up for sale in 1959, Indiana University President Herman B. Wells bought it (and its tug) for $30,000.  That was the beginning of a wonderful episode in the history of the I U Theater Department.

The summer of '64 was the busiest season yet for the showboat.  There were 74 performances in 32 cities and towns in Indiana, Kentucky, Ohio, and Illinois.  Theater students did everything.  They presented the plays, of course, but they also swabbed the decks, tended the ticket office, popped popcorn, washed dishes, handed out programs, made beds, did laundry, and helped clean the theater, which seated 423.

Indiana University operated the showboat for six or seven years in the 1960s.  Other plays presented included "Rip Van Winkle," "Charlie's Aunt," and "Abie's Irish Rose."
It was a unique and wonderful experience for students, one of whom was a young actor who ended up in Hollywood.  "I stoked the furnace for the calliope," said Kevin Kline, "and had a glorious summer aboard the Majestic!"

Over time, the cost of running the boat became too much for the university.  In 1967 the Majestic was sold to the city of Cincinnati and was docked on the Ohio river in the Queen City.  Though it no longer prowled from town to town, the old showboat continued to provide floating entertainment for another 40 years.

Alas, 2013 was the final season for the Majestic in Cincinnati.

You've got to admit, the old girl had a pretty good run.  For about 80 years she provided a unique theater experience, not only for audiences but for the many thespians who trod her boards.

The young actors I saw on the Majestic 50 years ago are, like me, no longer young.  I hope their showboat memories are as happy as mine. 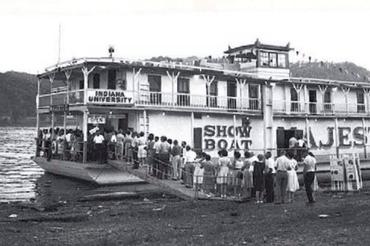