What child hasn’t been fascinated by these luminescent little creatures?  Who hasn’t collected them in jars, making an all-natural lantern?  And yes, we must admit that we conducted our own scientific experiments, dissecting the bugs to see what made them light up.

Having fond memories of lightning bugs, but knowing very little about them, I decided to do a little research.  First, the lightning bug or firefly is neither a bug nor a fly.  It is a beetle, and there are over 170 types of them in the United States.

Indiana has at least 43 varieties.  The Hoosier State has played a big role in the study of the Lampyridae family of beetles (their official name.)   Much of what we know about firefly flash chemistry was discovered by scientists working in the Department of Entomology at Purdue University.  As a matter of fact, the State of Indiana has adopted Say's Firefly as the official state insect.  It is named for Indiana Naturalist Thomas Say who has been called the Father of American Zoology.  We join 46 other states which have official insects.  Illinois has its Monarch butterfly, Ohio has its official ladybug, and Kentucky has its certified Viceroy butterfly.  The firefly is official in only two others, Pennsylvania and Tennessee (which got carried away and also adopted the ladybug and the honeybee.)
Say and the entomologists who followed him put the firefly under their microscopes.  They learned that the “fire” comes from a chemical reaction that takes place in special cells of the insect’s abdomen.  These cells, called photocytes, contain two chemicals called luciferin and luciferase (named after Lucifer, the fallen angel of light.)  The photocytes combine with oxygen and other chemicals in a process the scientists call “bioluminescence.”  As a result, these bright little beetles use tools named for the devil to light up God’s world.

Why do they blink?  You guessed it.  They are looking for love.  The ones flying around are the males.  The females sit in the brush and respond by flashing their own little lights.  The blinking glow is also part of the creature’s defense system.  Potential predators know that the chemicals in the light are bitter.   The light also serves as a distress signal and warning to other fireflies.  Those we caught in jars were probably flashing away like mad to warn their friends.

The larvae of fireflies are commonly called “glowworms.”  They don’t flash, but display a constant glow that is turned off when disturbed.  By the way, they’re the only insect larvae to make it to the hit parade.  In the 1950’s, the Mills Brothers lit up the charts with “Glow little glowworm, fly of fire, glow like an incandescent wire.”

Yes, the bright little Lampyridae gets a lot more attention than most of the three million other types of insects in the world.   Poet Robert Frost wrote about “Fireflies in the Garden,” and James Whitcomb Riley described "How the fireflies in the twilight drifted by like flakes of starlight.”  There is a magic in this little beetle than outshines any neon sign or computer graphic.  It fascinates children and intrigues adults.  We have learned from it, too.  Its chemistry has helped us synthesize Luciferin, which is now used in glow sticks and is currently being tested in medical research on such diseases as cancer and multiple schlerosis.

Some folks may think it is frivolous to have a state insect.   I don’t think so.  That little lightning bug at my window is a glowing little miracle of the night.  Its life is short - just a few months.  During that brief spell it does its best to cast a small light into the darkness.   We can only hope that in our own season we can do as well with what we have been given.

So, let us honor the tiny lightning bug, the night visitor that brightens the eyes of all who behold it.  It just can’t help it.  After all, as the song says, “When you’ve gotta glow, you’ve gotta glow.”

As the little insect winked his way on into the dark, he left me thinking about childhood summer nights when our backyard world was aglow with lightning bugs. 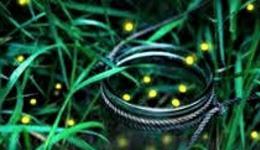