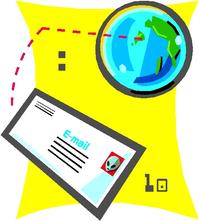 E-MAIL AND TEXT:  Hit "Pause" before you hit "Send"...or...You seldom get into trouble for things you don't say

Abraham Lincoln said that if you become angry with a person, you should write that person a letter.  Make it a long letter.  Go into specific detail about each and every complaint.  Spare no particulars.  Write several pages if necessary.

When you are finished, read the letter to yourself carefully.  Satisfy yourself that the scoundrel to whom the letter is addressed has been completely chastised.  When you are sure that nothing has been left out,  heartily sign your name to the letter and put it in an envelope.

Then throw the letter away.

That was good advice 150 years ago, and it is still good advice today.  Problem is, Honest Abe lived in a time long before e-mail.

Electronic mail is marvelous.  It provides communication to nearly any spot in the world.  It is relatively cheap and easy to use.  It is amazingly fast, almost instantaneous.   That’s just it:  it is too fast.  People are getting into trouble with it.  They are happily keyboarding each and every thought that flows from their brains through their fingertips.  As quickly as the period (or more often an exclamation mark) punctuates the final sentence,  the “send” button is pushed and the message is in another person’s electronic mailbox.  Often the writer of the letter does not even read what has been sent, so anxious is he or she to convey the thoughts of the moment.

There is no pause or delay for reflection, contemplation, or second thoughts.  No time for ardor to fade or emotions to cool.

The post office system (“snail mail” to e-mail fans) at least has a built-in hoop system for us to jump through.  Many a red-hot letter has not found its mark because the sender couldn’t find an envelope or didn’t know the zip code.  Perhaps there was no stamp handy.  Maybe the letter lingered on the kitchen counter waiting for someone to take it to a mailbox.   At any rate, the target of an angry letter often remained in the bliss of ignorance, oblivious to the firestorm that nearly reached him.

The old system made us “count to ten” (or a thousand) before we unleashed our angry thoughts.  The e-mail system has no such long-fuse.

It’s no wonder that we are hearing more and more about trouble that e-mail is creating.    Poorly chosen words, harsh words, sarcastic words, just plain stupid words have flashed around enough now that feelings have been hurt and relationships have been broken.  We are learning the hard way that our knee-jerk reactions, our impulsive responses, are not usually the ones we want to go on the record.

The corporate world is reeling from problems caused by e-mail.  Gossip, naughty jokes, prejudiced remarks, confidential information, and indiscreet words of all kinds have zipped to computer screens from the basement to the penthouse of high-rise office buildings coast to coast.  Embarrassment, lawsuits, and lost jobs have resulted.       Another problem with this new messaging system is that you never know who is going to be reading the stuff you write.  You may think you are sending information to just one person.  But that one person has but to click one button and forward your letter to hundreds more.  That juicy item that you thought would be “just between you and me” suddenly becomes a piece of mass media.

I suggest that companies that operate the e-mail networks should address this problem.  How about a built-in delay to the sending of a message?   Computer users are accustomed to getting all kinds of question boxes as they move from page to page.  Perhaps before an e-mail is sent, the sender could be asked, “Did you really mean to say that your brother-in-law is an idiot?” or “Is this something that you would want your boss to read?”

Maybe the computer could keep the message on “hold” until the sender can verify that he has taken a walk around the block or splashed cold water on his face.

As more of and more of us send e-mail messages,  we must remember that once the words get out there,  they aren’t coming  back.  Abe Lincoln might advise modern writers to type all you want.  Just don’t hit “send.”  You seldom regret something you didn’t say.