Just recently, everyone in Central Indiana had to learn to use 10 numbers instead of seven when calling anybody.  Local calls now require the area code.  This is because there are so many phones these days that one code is not enough.  There are now two area codes for our part of the state, and everyone has to dial a full 10-digit number to reach their party.  Of course, we don't use the word "party" anymore to designate the person we are calling.  They may be at a party, but they are not a party just because they answer the phone.  And, of course, most of us don't actually "dial" or "push" numbers anymore.  They are programmed on our phone.

A century ago the chances were that you did not have to know any phone numbers.  You simply picked up the receiver and called "central."  The operator would do all the dialing for you.

It wasn't too long before numbers were assigned to each phone in town.  Sometimes it was just a couple of numbers, but before long it was four or five.  When the number reached six, the folks at the phone company decided that it would be helpful if they made up names for the various exchanges.  They figured their customers could more easily remember a name and four numbers instead of a string of six numbers.

That began the romantic age for phone numbers.

​​            From the 1920’s through the 1960’s, a telephone in America had not only a number but a name.  That name gave it a persona that amounts to nostalgia for those of us who remember.  The phone number at our house when I was a child was IDlewood 4245.  My mind has that number bundled up with party lines, Captain Midnight Secret Decoder Rings, the ice man, and Dick and Jane readers.  For folks who like to reminisce, the old telephone numbers can ring up some fond memories.

Veteran Greenwood residents might remember their old TUcker numbers.  Many Franklin residents will recall the REdfield exchange.  Whiteland phones all answered to a KEllogg number.  In Bargersville it was GArden, and MAyfair jingled the phones in Trafalgar.  Providence numbers must have rung poetically to the TEnnyson calls, and Marietta folks must have felt quite regal with their PAlace numbers.  Columbus phones answered to DRexel digits, and Shelbyville had the EXpress exchange.  I can still recall many of the phone tags in the Indianapolis area during the 1950’s:  FLeetwood, BElmont, IRving, ATwater, MElrose, WAlnut, and GArfield.  Do any of those names ring a bell for you?

In those days a phone number could conjure up all kinds of images and impressions.  An IRving person lived on the near east side of Indianapolis, and a BElmonter was from way out in Speedway.  An ATwater girl was ritzy, residing on the north side of town.  You knew she would never consider dating an IDlewood guy.  A MElrose number was very often a business.  The Morris Plan company centered its whole advertising campaign around its MElrose 11-3-11.

Some phone numbers became nationally-known because of the media.  Radio and television programs often used Murray Hill numbers from New York City.  Dedicated “I Love Lucy” fans will tell you that Murray Hill 5-9099 would ring the bell at the home of Lucy and Ricky Ricardo.  Another New York exchange, BUtterfield 8, took on a more passionate mood after the 1960 release of a steamy movie of the same name starring Elizabeth Taylor .

During the Swing Era, Hotel Pennsylvania on 7th Avenue in New York was a popular stopping place for the big bands.  It was right across from Penn Station and just around the corner from the Empire State Building.  Glen Miller and his band played there often. They liked everything about the place, including the telephone number.  The 1940 Miller recording of  “Pennsylvania 6-5000” made it the most famous phone number in history.

During the 1960’s and 70’s, the phone company fazed out the old exchange names in place of straight numerical digits.  It seems the names were not standard-enough across the nation and were causing a lot of confusion in foreign countries.  Thus, the ATwater 7 girl became a bland 357.  Instantly her romantic northside elegance vanished.

There were those who resisted the change.  The members of the Anti-Digit-Dialing-League fought the good fight.  ADDL members wrote letters to their editors and petitioned telephone companies across the land.  One protester cried, “Give me LIberty or take the darn phone out!”   Progress was not to be stopped, however, and all the friendly phone names, the PLazas, the GLadstones, the WOodlawns, were banished to the land where old telephone books go.

Today the Hotel Pennsylvania is alive and well on 7th Avenue in New York.  It has had several ownership changes and has been completely renovated and modernized.  Nearly everything has been improved and changed with one exception.  The phone number  is the same one the hotel has had since 1919.  The listing in the phone book says 736-5000.  But everyone knows what it really is.  Just dial the number and you’ll hear the Glen Miller band shouting “Pennsylvania Six-Five-Oh-Oh-Oh!” in tribute to the days when a phone call was a nickel and every number had a name. 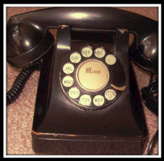