Grandpa Hall had a Model T Ford truck into the 1950s, long after everyone else had left their Model T in the scrapyard.  He liked that old gal.  He understood her and she understood him.  That Model T was amazing, and it had an amazing effect on the Hall farm and the world.
Ford tried other models before hitting it big with the T.  It was just what the nation needed to replace horse-drawn carriages and wagon.   It was lightweight with a 100-inch wheelbase.  There was more than 10 inches of ground clearance, perfect for use as an all-terrain vehicle.  The unique four-cylinder, 177-cubic-inch engine delivered better than 25 miles-per-gallon.  The rugged chassis was fashioned from vanadium and heat-treated steel.  There were many body styles available, including two and three seaters, touring cars, delivery vans, and one-ton trucks.  Driving was a snap.  A hand lever under the steering wheel controlled the accelerator.  Foot pedals operated the innovative planetary transmission.  It was a breakthrough in safety engineering.  Ford claimed in its literature that “the driver can stop, start, change speeds, or reverse the car without removing the hands from the steering wheel.”

On top of all that, the versatility of this model was unbelievable.  Utilizing available options and the vast after-market conversion kits, the car’s engine could be used to power farm equipment, boats, and even lightweight aircraft.

Best of all was the price.  A three-seat runabout version sold for just $825.  The touring car was $25 more.  You could have any color you want, provided that it was black.  Incidentally, the car had no stereo, no heater, and no windshield wipers.  It also had no electric starter.  It had a nifty hand crank, though.

First introduced in 1908, the Model T  led to the development of the first moving assembly line.  The process became so smooth that the Ford factory could build the car in only 93 minutes.  The price eventually dropped to $260 for a brand new roadster, making it possible for almost every working man to own one.

Often called the “Tin Lizzy,” the Model T changed America and the world forever.  By the time it was retired in 1927, the car had acquired an electric starter, windshield wiper, electric lights, a horn, and even a speedometer.  Over a period of 19 years, the Ford factory produced over 15 million Model T’s.  An impressive number of them are still running, thanks to the tender loving care of devoted enthusiasts.

Car lovers everywhere owe a debt of gratitude to the Model T.  E. B. White penned eloquent appreciation in an essay entitled “Farewell, My Lovely.”  He said the Model T “was the miracle God had wrought. And it was patently the sort of thing that could only happen once. Mechanically uncanny, it was like nothing that had ever come to the world before. Flourishing industries rose and fell with it. As a vehicle, it was hard-working, commonplace, heroic; and it often seemed to transmit these qualities to the persons who rode in it.”

America has a special place in its heart for the Model T.  It launched our love affair with cars.  Will a future Indianapolis Automobile Show feature a “retro” version?  Perhaps a computerized Tin Lizzy with heated seats, CD stereo, cruise control, and satellite navigation?  Probably not.  Its boxy shape would never fit today’s aerodynamic demands, and the narrow wheels and wooden spokes would provide much too hard a ride for modern drivers.  Anyhow, the Model T should be left where it is: the dominant mechanical marvel of the early twentieth century.  Nothing can replace it.  It’s the car that put the world on wheels. 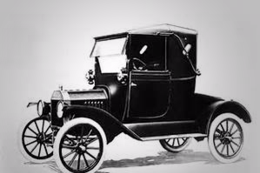