between the keys of his piano


Hoagy Carmichael is back in Bloomington, on the campus of Indiana University where he attended school so many years ago.   Not far from the location of an old campus hangout called the Book Nook, there is a life-sized sculpture of Hoagy sitting in a familiar place for him: on a piano bench.

Legend has it that the Book Nook was where, in 1927, Carmichael picked out a tune on the piano that “Reader’s Digest” has called the best-loved song of all time.  It was “Stardust.”  Fans often asked Hoagy how he wrote the famous song.  He was humble about it.  He said he did not actually write it.  He said he just found the melody lingering between the keys of his piano one day.   Perhaps that's where he found all those other familiar tunes, like “Georgia on my Mind,” “Skylark,” “The Nearness of You,” “Ol’ Buttermilk Sky.” These great songs helped make the Hoosier law student a legendary songwriter, singer, and actor. Actor?  Of course.  Hoagy had some great Hollywood parts in movies like To Have and Have Not, The Best Years of Our Lives, and Young Man with a Horn.

Much of Hoagy’s early fame can be attributed to radio.  His music caught the first wave of the new medium’s immense popularity.  The first station, KDKA in Pittsburgh, started regular broadcasting in 1920.  New stations hit the air almost everyday.   Soon more homes had radios than inside plumbing.

“Stardust” was all over the airwaves.  Trivia buffs will tell you that it was the song being performed by the fictional Ramon Raqeullo Orchestra when the first reports of a Martian invasion were broadcast in 1938 during Orson Welles’ famous “War of the Worlds” drama.

Radio was good for Hoagy, and Hoagy was good for radio.  Their happy relationship lasted for decades.  When television sets invaded living rooms in the early 1950s, radio was forced off of center stage.  It became a companion medium.  Programming was slimmed down to music and news.  Some stations went “top 40,” “middle of the road,” or country.  Others chose to continue to play what were called the “standards.”  Those were the big bands, ballads, jazz pieces, show songs, vocals, and more that represented American music of the first half of the 20th century.

The great standards are no longer on the air.  The superstars are missing.  Call any local radio station and request a song by Frank Sinatra.  You’ll learn that he’s not on the play list.  Neither are Nat King Cole, Rosemary Clooney, Dean Martin, and scores of others legendary voices.  There is plenty of new talent that deserves air time, too, but they are not getting it.

It seems a shame. There is a rich American songbook that is untapped by radio today.   The switch is turned off on marvelous music from Broadway, the movies, the big band era, and most of the songs popular before the dawn of the rock era.  Nowhere on the dial can be heard the works of Rodgers and Hammerstein, Johnny Mercer, Harold Arlen, Harry Warren, or even Irving Berlin.  It goes without saying that Hoagy Carmichael’s music is missing, too.

Of course, there is a wonderful postscript to this story.  We no longer need radio for entry to our song world.  The internet now provides access to the entire universe of music.  We can find just what we want when we want it.  The music of Hoagy Carmichael and all the other greats are still out there, waiting for just a little "Stardust" to magically make them play once again. 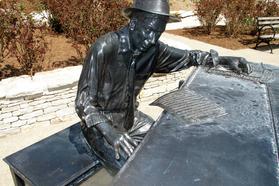