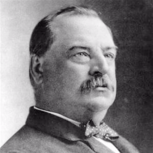 
In the political arena these days, members of all political parties seem thoroughly dismayed by the vicious rhetoric which has infested the newspapers, internet, television, and radio.

It might be refreshing to look back at presidential elections that were more civil.  A good case in point would be the one in 1888, when Indiana's Benjamin Harrison was challenging the sitting President, Grover Cleveland.  The two contenders were both old-school gentlemen.  Harrison opted to make all of his campaign speeches from his Indianapolis home on Delaware Street.  He could easily have traveled the nation by train, but he chose to be a front porch campaigner, even though his home did not have the large porch it does now.  (Harrison added the porch after he returned from the White House.)

It is estimated that Benjamin Harrison spoke to over 300,000 people from his front stoop between June and November of 1888.  When the crowds were too large for his front yard, he

moved a few blocks south to University Park.  Today there is a prominent statue of Harrison on New York Street, standing in the area where he made those speeches 128 years ago.

Grover Cleveland did not much like speech making and did little of it during his bid for re-election.  He issued policy statements and let surrogates represent him.  The result was a low-key, low-emotion election season with both candidates acting like adults and seriously addressing the issues.

Harrison won the election of 1888.  He did not win the popular vote, but he had the votes where they mattered in the electoral college.  Grover Cleveland accepted the defeat without complaint.  One of his last official acts was to invite Harrison to the White House for dinner.

After Harrison's inauguration, Cleveland went  home to enjoy life with his young bride, Frances, whom he had married in the White House just two years before.

President Benjamin Harrison and wife Caroline were occupants of the Executive Mansion when electricity was first installed, replacing the gaslight fixtures. The old story goes that they were both afraid of the strange new utility and refused to touch the light switches.

Harrison surprised and irritated fellow Republicans when he bucked their directives and insisted that party hacks would not automatically get patronage. He wanted to make sure his appointees were qualified for their jobs. It sounds like a "no-brainer" today, but it was liberal thinking in those days. Six states came into the Union under Harrison, more than any other Presidential term. Oklahoma was opened for settlement, 13 million acres of land were put into reserve for national forests, the size of the Navy was greatly increased, and Congress passed the Sherman Anti-Trust Act and the McKinley Tariff

Toward the end of Benjamin Harrison's term, in the midst of what should have been a re-election campaign, Caroline grew seriously ill with tuberculosis.  The President stayed at her bedside.

"I was so removed from the campaign that I can scarcely realize that I was a candidate," Harrison wrote to one supporter.

Out of a sense of respect and fairness, Grover Cleveland, once again the Democratic candidate, refused to campaign against his old rival.

Caroline Harrison died in October of 1892, and two weeks later Grover Cleveland became the only President to win a second non-consecutive term.

This time it was Harrison who invited Cleveland to the White House for dinner.

The Hoosier President returned to his beloved home on Delaware Street and resumed the job he had always liked best:  attorney at law.

One might wonder what Harrison and Cleveland would think of the current political climate.  They likely would admit that the world has changed greatly over the past century, but they might also quietly suggest that decency and civility in public life should never be out of fashion.