The motion picture Pearl Harbor brought back, once again, the horrors and heroics of World War II.  The war, the “big one” as its veterans call it, continues to be on the collective mind of the nation.    Movies like Saving Private Ryan and books like Tom Brokaw’s GreatestGeneration honor the men and women, in uniform and on the “home front,” who sacrificed to serve their country.   A memorial to them now stands on the National Mall in Washington.

Perhaps forgotten among the heroes of World War II is a newspaper correspondent from Indiana.  His name was Ernie Pyle.   His column was the most widely read during the war, appearing in over 200 newspapers.  Author James Tobin has called him “America’s Eyewitness to World War II.”

Ernie was not content to sit behind the lines and simply forward dispatches sent by officers in the field.  He lived with the soldiers, crouching in foxholes and dodging enemy fire.  His reports contained, not the exploits of the brass, but the heroics of buck privates and corporals who did most of the fighting.  He loved the infantry, writing “they are the mud-rain-frost-and-wind boys.  They have no comforts, and they even learn to live without necessities.”

A friend of Ernie’s, writer John Steinbeck, said this:

There are really two wars and they haven’t much to do with each other.             There is the war of maps and logistics, of campaigns, of ballistics, armies, divisions           and regiments--and that is General Marshall’s war.

Then there is the war of the homesick, weary, funny, violent, common men         who wash their socks in their helmets, complain about the food, whistle at the     Arab girls, or any girls for that matter, and bring themselves through as dirty a business as the world has ever seen and do it with humor and dignity and courage--and that is Ernie Pyle’s war.

Through his beans and bootstrap writing, Ernie gave a voice and a face to the ordinary GI.  He was with the boys as the Allies invaded North Africa, Italy and Normandy and chronicled the life of the average “Joe” in uniform.  “Sherman was right,” Ernie wrote.  War is “tired and dirty soldiers who are alive and don’t want to die, of long darkened convoys in the middle of the night, of shocked silent men wandering back from the hill of battle, of jeeps and petrol dumps and smelly bedding rolls and C rations and cactus patches and blown bridges and dead mules and hospital beds and shirt collars greasy-black from months of wearing, and of laughter, too, and anger and wine and lovely flowers and constant cussing.  All those it is composed of; and of graves and graves and graves.”

In 1944, Ernie was awarded the Pulitzer Prize for distinguished correspondence.  Books like Brave Men and Here is Your War became best sellers.  Yet he stayed in the ranks, scribbling notes, getting it down for the folks back home.  For family and friends left behind, Ernie was a link to loved ones in faraway lands.  In his book My War,  Andy Rooney said “it was Ernie’s compassion for life and his attention to details that seemed insignificant to the rest of us that made him the best of the war correspondents.”  Biographer Lee G. Miller writes, “No other journalist ever evoked such mass affection as was accorded him during his meager tenure as a national figure.  With vivid detail and human insight, he made the war real to the home front.”

Ernie Pyle was killed in action on April 19, 1945, downed by Japanese sniper fire on the island of Ie Shima, west of Okinawa.  His death made headlines across America and around the world.  GI's everyone mourned the death of one who had spoken for them.

World War II ended 70 years ago.  Most of the soldiers are gone.  It is all history book stuff now.  Faded, too, is the fame of Hoosier Ernie Pyle.  His hometown, of course, has not forgotten.  His birthplace in Dana is carefully preserved and now serves as a World War II museum.

What might please Ernie Pyle the most is the Lifetime Achievement Award from the National Society of Newspaper Columnists.  The award, presented annually since 2003, is named for him. 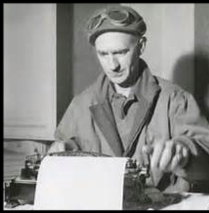