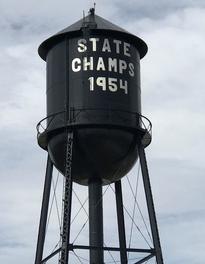 Return to the Table of Contents

Hoosier hysteria, they call it.  The Indiana High School basketball tournament.  There’s a magic to it, even today in the midst of a whole world of sports swirling around huge arenas, domes, cable channels and multi-million dollar contracts.

What is it about the simple game of high school basketball that so captivates Indiana?  What is it that brings a misty eye to any true Hoosier roundball fan?  The answer can be found in one word:  Milan.

The Milan Miracle of 1954...the true story of HOOSIERS


Milan.  It’s a small town in Ripley County.  You see the exit sign as you drive down Interstate 74.  Take that ramp and you’ll find Milan 10 miles down State Road 101.  Those 10 miles, though, will take you back six decades.  In Milan it’s forever 1954.  Glance up at the old water tower:  Bright white letters proclaim “State Champs 1954.”

Check out the welcome signs on the outskirts of town.  Each has a picture of a large orange basketball declaring “State Champs 1954.”  Peruse the walls at the Railroad Inn (after you order some fried chicken.)  There they are:  Black-and-white press photos of coach Marvin Wood and the Milan boys basketball players, glorious in victory on that March 20 Saturday night so many years ago.

Enshrined in a glass case is team captain Gene White’s letter jacket with a large gold “M.”  The friendly waitress will gladly tell you how to find the spot where the school used to be, before they tore it down.  They demolished the gym, too, but the hardwood floor was saved and sold as souvenirs, a treasured symbol of a dream come true.

Milan.  It’s any small-town team that ever dreamed of making it to the top.  Milan.  David vs. Goliath.  In real life, Goliath was Muncie Central, a team whose Bearcasts were supposed to win the title in ‘54.  But little Milan, “Miracle Milan” as they would later be called, had other ideas.

The school had only 162 students.  But young coach Marvin Wood knew that a basketball team needs only five players on the floor.  He had five and then five more.  Together they would prove to the world that a small team with talent and spunk and a couple of breaks can make it in the big city.

More than 700 Indiana high school began the basketball tourney in ‘54.  When it was nearly over, two teams were left.  There must have been some Muncie fans at Hinkle Fieldhouse for the championship game that Saturday night, but looking back through the mist of time it seems that all 15,000 people were rooting for Milan.

It was a game to remember.  Early in the fourth quarter, Milan guard Bobby Plump held the ball for an amazing 4 minutes and 15 seconds.  Gray heads still shake in wonder when they remember the hush that dominated the huge arena and the tension that tightened with each second that clicked off the clock.  When the ball was finally back into play, the lead shifted back and forth.  With 18 seconds to go in the fourth quarter, it was tied 30-30.  That’s when fate stepped in and the fairy tale began.

Milan’s Ray Craft got the ball to Plump.  Six seconds to go.  Plump faked left, then went right.  At the edge of the free-throw line, he stopped, squared, fired the ball.  It sailed through the air and into the net.  The buzzer sounded, the crowd erupted and Bobby Plump, forevermore, would be known as the man who made the “shot heard round the state.”

The Milan boys ruled Indiana from that moment, celebrating as they rode in Cadillacs the wrong way around the Circle.  For their victory procession back home the next day, they started with six cars.  There was no interstate highway back then, and as they traveled old U.S. 421, the motorcade grew as it crawled through towns and villages along the way.  By the time the caravan arrived in Milan, it was 13 miles long.  And that little town, normally home to 1,200, had enlarged to 40,000.

Now Milan is no longer just a town.  It’s a legend, a legend that found its way to Hollywood for “Hoosiers,” named the best sports movie ever made in a poll taken by USA Today.  It’s a legend that haunts playing fields and arenas, wherever there’s a hope that maybe this could be the year.

Maybe this could be our chance.  Maybe we could be another Milan.