It comes as good news to those of us who like the poetry of Edgar Guest and James Whitcomb Riley.   It's encouraging to the ones among us who enjoy Rodgers and Hammerstein over Verdi.  It's reassuring to people who prefer Agatha Christie to Beowulf.    I'm talking about the news that the fine art world is "rethinking" Norman Rockwell.

I have long thought that my taste in the "arts" must be hopelessly unsophisticated.  In college, I learned that Guest and Riley were sentimental hacks whose output was unworthy of discussion.  In literature, I  read the "classics."  Some were pretty good but many were boring and incomprehensible without the help of Cliffs Notes.  In many cases I agree with Mark Twain who declared that a classic is a book that everyone should read but nobody does.

The music that sets my foot a-tapping arises more out of Dixieland than Chopin.  I tend to side with Abe Martin,  who held that classical music is the kind that you keep hoping will turn into a tune.

When I visit art museums, I wander from van Gogh to Picasso, often wondering what I am looking at.  I have learned to like the Impressionists but, like Jerry Seinfeld's father, I think Monet painted without his glasses.  That might explain why his pictures appear to be slightly "out of focus."

My favorite artist  is Norman Rockwell.  I  have learned from the critics, though, that Rockwell was like Riley.  His work isn't really up to par with the great masters.   He is too popular to be any good.   Too prolific, too.  Anybody who could turn out 4000 paintings and drawings wasn't spending enough time agonizing over his work.

Besides, according to the authorities, Norman Rockwell wasn't an artist at all. No. He was an illustrator.  In the art world, an illustrator is closer to a house painter than one who creates "art."  An illustrator merely sketches pictures to go with a story, a story that probably does not qualify as a "classic."

Now it appears that all of that is changing.  In a recent story in the Daily Journal, British historian Paul Johnson confesses that "people do not like Picasso, they just feel they ought to, but they genuinely love Rockwell's painting."  Curator Harry Philbrick at the Aldrich Museum of Contemporary Art has revised his opinion after visiting the Rockwell museum in Stockbridge, Massachusetts.   "I didn't realize...that he was such an excellent painter," says Philbrick.  "I would agree absolutely that he is not just an illustrator.  He is a first-rate artist."

Well, it's about time.  The art galleries are finally catching up with our house, which has several Rockwell prints on exhibit year-round.  Over my desk  is a picture entitled "Teacher's Birthday."  A prim schoolmarm is shown standing in the midst of what moments ago must have been bedlam.  An eraser is on the floor next to pieces of chalk, one of which is smashed.  We see the students only from the back, but they are sitting straight up in their seats, hands clasped in their laps.  On their faces must be the look of innocence.  The teacher's face is weary, but in that countenance we detect a smile.  For behind her, on the blackboard, in many forms of young handwriting, is written "Surprise!  Happy Birthday, Miss Jones!"

Every Rockwell painting tells a story.  That's why movie director Steven Spielberg owns 14 originals.  A picture is truly worth a thousand (or more) words when it was painted by Norman Rockwell.  Each of the 321 covers he did for The Saturday Evening Post was a short story in itself.  His work captures the everyday moments of life that take on an immortal meaning when put to canvas.  As Paul Klee said, "Art does not reproduce the visible; rather it makes it visible."  The titles of the Rockwell paintings cut to the heart of the matter:    The Swimming Hole, Walking to Church, Prom Dress, Saying Grace, The Marriage License, The Outing, Grandpa and the Children.

Commenting on his own work, Rockwell once said, "I showed the America I knew and observed to others who might not have noticed."  It's true.  Rockwell showed us the magic that can be found in a barber shop,  a doctor's office,  or in a stroll down Main Street.

I feel a bit smug about what is going on with Norman Rockwell.  The "experts" took a long time to recognize his talent.  I noticed it at first glance.  I guess I know a good picture when I see one.

His Pictures Painted a Thousand Words ...and then some. 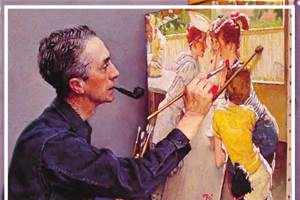