When the lights go out at home


The smoke alarm shrieked quickly and then died, along with every other electrical device in the house.  That's how  power outages begin at our house.  We have had them before.  The difference this time is that it would be fourteen hours before current would surge through our wires again.

This summer had been one long nightmare for the electric companies.  Storm after storm raged through our area, each one leaving fallen trees and downed power lines.  The interruptions to our electrical service had been few.  The ones that occurred were short-lived, from a few seconds to no more than 20 minutes or so.

This one, however, was destined for some duration.  A power outage is fun for a short time.  There is a novelty to it, a feeling of rusticity and roughing-it.  One thinks of Henry David Thoreau in his cabin at Walden Pond.  "Simplify, simplify," said Thoreau, who in 1845 moved to the woods to reduce his life to the bare essentials.  Now it takes only a snapped electrical line or a blown transformer to put us in the same situation.

You do dumb things when the power is off.  You know full well that nothing works, but that doesn't stop you from blithely flicking the light switch as you walk into each room.  Each time, you are momentarily surprised when the lights don't respond.

You decide to make a phone call and pick up the cordless phone.  Once again, you're momentarily perplexed at the dead line.

At one point I wondered if our cable service had also been interrupted.  I pointed the remote control at the television set and punched several times before my wife laughed and reminded me that the TV, too, operates on electrical current.  She wasn't so smart, though.  Fearing that the power loss would cause her to miss her favorite show, she made plans to set up the DVR to tape it.  Duh.

It so happened that we were having the trim on our house painted that day.  We informed the two painters that we were lacking voltage, but they assured us that it would be no problem for them.  Ladders and paint brushes have yet to be electrified.  One of the men admitted to me later, though, that he had spent a fruitless few moments punching the button for the garage door opener.  His partner laughingly told him to ring our doorbell for help.

As the outside temperature rose to the low 90's, the environment inside the house warmed up, too.  It made me realize how soft we have become.  No air conditioning.  No electric fans.  How did our ancestors survive the summers?

I got yelled at several times for opening the refrigerator door.  "You'll let all the cold out," my wife reminded me.  But I kept opening it, anyway.  I couldn't help it.  Since childhood, it has been  impossible for me to walk past a refrigerator without looking in.

Early on I had placed a call to the power company.  I knew the previous night's storm must have knocked down some lines.  The computer dutifully took my service call.  I knew that we were in the same boat with many people.  I remembered reading about previous storms that had left homes without power for days.  We tried not to complain.

A house without power is an amazingly quiet place.  Gone is the hushed roar of the air conditioning system.  Stilled is the hum of the appliances.  Absent is the whoosh of the ceiling fans and the murmur of TV's and radios.  Brought to the fore are sounds you never noticed before.  Battery-operated quartz clocks, so mute most the time, cause quite a commotion when they are solo.

As evening approached, the consensus was that dinner would be eaten out.  Might as well make the best of it.  We hoped that the restaurant would have power.  It did.

On our return, suspense began to build.  Would the amps be flowing in our little castle?  As I turned into the driveway, I instinctively punched the garage door opener on the visor over my head.  Magically, the big door began to rise.  Eureka!  We had been delivered from the kilowatt wilderness.

The house was already beginning to cool as we walked in.  We could hear the familiar drone of the air conditioner.  We felt the swish of the ceiling fans.  The power was back, just in time to catch our usual prime-time television.

There was work to be done, for sure.  All of those digital devices were blinking madly and each had to be carefully reset.  In a few minutes the phone rang.  It was someone from Cinergy, checking to verify that our power had indeed been restored.   Yes, the meter is running again!

Thoreau had the right idea.  It would be best if we tried to simplify our lives.  After a day in the dark, I believe that electricity helps us do that.  There's nothing simple about shaving by flashlight. 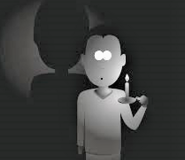