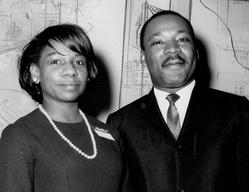 We often think of history as a course required in school.  It is something found between the covers of a hefty textbook or in the musty room of some old building.

Marguerite Graves of Indianapolis made history.  As a young Black woman in the 1960s, she didn't just read about the Civil Rights Movement, she joined it.  She rode a Greyhound bus deep into the South and marched with Martin Luther King.

King is now an icon on the same level with Washington, Jefferson and Lincoln.  But to Marguerite, he is more than the 30-foot statue now standing on the National Mall.  He is a real human being, a mentor, and a friend whose company brought her joy.

"We kept him laughing," she says.  "His laugh started at the pit of his stomach and came all the way up."

After graduating from Crispus Attucks High School, Marguerite moved to Los Angeles.  Soon she was involved with King's newly-created Southern Christian Leadership Conference.  This led to her first meeting with the civil rights leader.  The two found that they had a good deal in common.

"We had both been to Liberia," she says, "and we both were deeply interested in the future of that African country."

Each time King came to LA he was a guest speaker at one of the black churches.  Marguerite remembers, "At one church we were all there and after the services my girlfriend and I got ready to leave.  One of the members of our group came running and told us, 'Dr. King is asking for you two!'  We went upstairs.  He saw us.  He grabbed my friend Beatrice and me and kissed both of us on our cheeks.  He said never to let him come to Los Angeles without us coming to  at least shake his hand."

King's Civil Rights Movement was marching into the South.  That's why, in the hot summer of 1964,  Marguerite and her friend found themselves on a 2200 mile Greyhound bus trip to Americus, Georgia.  This was where, three years earlier, King had spent a weekend in jail for his civil rights efforts.

Marguerite speaks with enthusiasm of those memorable days:  "We stayed in the homes with the people," she says.  "Almost ninety percent of the people, the Blacks - we were "Negroes" then - in Americus had outhouses.  I said, 'Lord, I can't stay in a house with an outhouse!'  So they put my girlfriend and me in a house that had running water and everything."

They marched two and three times a day in Americus.  They paraded in front of government buildings.  They sat in front of stores.  One time they marched through town at midnight and ended up sleeping on the sidewalk.

Who could forget a moment like that?  Marguerite can't.

"Everybody got quiet after hugging and laughing," she says, "King's people said, 'Now, if you think you've done something, you haven't.  The work is just beginning.'"

The next job was voter registration.  Volunteers went from house to house, signing up citizens who in many cases had never before cast a ballot.

Marguerite remembers the elders in the community who had been denied the vote all of their lives.  "The old people didn't want us to pick them up in a car.  They wanted to walk to the registration place.  They said, 'I'm doing this for my grandchildren and those yet to be born.'"

A few years later Marguerite was back home to Indianapolis.  She wasn't finished with making history, though.  Through her association with the  L.. S. Ayres Department Store, she and associates established their own Hallmark store in the new Ayr-Way Shopping Center at the corner of West Washington and High School Road.  This was the first such store to be owned by Black women.

Still busy these many years later, Marguerite is proud of her role in history.  See sees it as a great adventure, a time to be young and hopeful and fired up to fight for a noble cause.

During those hot summer days in the 60s in the South, was she ever fearful? 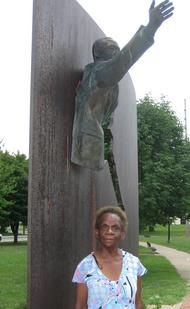