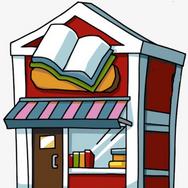 It has been a while since I wandered through a college bookstore.

The last time I had a real need to do so, Richard Nixon was in his first term, Three Dog Night topped the music charts, and gas was 40-cents a gallon.

It was a gift-shopping mission that led me to a university bookstore recently.  I noticed some differences right away.  The place was bigger and snazzier than the no-nonsense book stacks I browsed when I was student.  There was a lot to see, including some things which did not even exist when I went to college.  Who could have known in the early 70s that a little gadget called a "flash drive" would be as necessary as a notebook to a college kid today?

Something else I don't remember in my college bookstore was a coffee bar.  Enticing aromas of mocha lattes and cappuccinos greeted me just inside the door.

Textbooks were there, of course, but fewer than I expected.  I hear that more and more classes are going to electronic books for source material.

A large section of the store resembled a modern Barnes and Noble.  Shelves were stocked with best-sellers and thousands of other books.  Hefty overstuffed chairs invited readers to linger awhile.

There was a lot of apparel on display.  Caps, jackets, shirts, and scarves all proudly bore school colors and mascot logos.

Judging by the number and variety for sale, one of the most popular items is something we never needed in the Nixon days.  I'm talking about lanyards.   These are evidently prerequisites for college nowadays, necessary for displaying bar-coded name badges. Who doesn't have at least one such tag to wear?  The cords dangling around our necks are signs of the times, products of 9/11.  They tell who we are and where we can go.  The extent of our involvement in life can be measured by how many different nametags we have.

As we get older, we are occasionally heartened to see some remnant of our past which has survived the head-long rush of progress.  This vestige of younger years can make us feel that all's still right with the world.

That's what I felt when I went down the back aisle of the bookstore.  On the top shelf was a stack of blue books.  Blue books?  Are students still using these?

If so, that's nice to know.

For those who have never had the pleasure, a blue book is eight pages of writing paper stapled together with a blue cover.

I understand that the blue book originated at Butler University in the 1920s.  Professors wanted a simple exam booklet with lined pages.  A blue cover was chosen to reflect school colors.  Now I know why the blue book played such a large role in my life at Butler.

A blue book exam strikes fear into the hearts of college students.  Perfect in its simplicity, it can be fatal in its consequence.  Essay style, of course, the test usually involves just two or three thorny questions.  The task is to fill the lines with the knowledge and insight gained through the course.  Sometimes the whole semester grade is riding on the words sweated out on those eight pages.

A famous blue book story involves a philosophy class.  It seems that, for the final exam, the professor placed a chair upon his desk.  On the board, he wrote:  "Using every applicable thing you've learned in this course, prove to me that this chair does not exist."

Students went busily to work, filling the blank pages with facts and theories.  Some toiled for more than an hour.  One student, however, wrote for just a few seconds, turned in his test, and left the classroom.

When the professor checked the booklet later, he found just two words.  The student had carefully written, "What chair?"

That young man has gone on with his life now. One wonders where he might be.  What doors now open for him when he flashes the badge dangling from his lanyard?