Where were you when you heard the news?  What were you doing when the first tower fell?

Maybe you were sipping coffee when the bulletins flashed on the television screen.  Perhaps you were in the car and heard it on radio.  Maybe you were at work, or in school, or grocery shopping when the shocking news reached you.

Each year as we approach the anniversary of the 9/11 attacks, we rerun that tragic day in our minds.  We share our stories with friends.

I guess each generation has had at least one "Where were you?" event.  Citizens of Boston probably talked for years about what they were doing when they learned that British Redcoats had fired on Patriots at Concord Bridge on April 19, 1775.  Called "the shot heard round the world," the battle helped spark the Revolutionary War.

A later generation would remember where they were and what they were doing on that April day in 1861, when they heard that Fort Sumter had been attacked, an act the led to the Civil War.

For my parents' generation, an unforgettable event was the bombing of Pearl Harbor on December 7, 1941.  President Franklin D. Roosevelt called it a "day of infamy."  My mother told me more than once about that fateful Sunday.  Mom and Dad were playing their weekly game of canasta with another couple when the news came over the radio.  They had met for cards each Sunday for several years, but Mom recalled that, after that December day, they never played again.  The world seemed to change overnight, she said, as everyone started working two jobs and had no time for card games.

The first such moment for my generation occurred on November 22, 1963, when President John F. Kennedy was assassinated in Dallas.  Nearly every American alive at that time can tell you without hesitation where they were and what they were doing when they heard the news.  Many, like my wife, were in school on that November Friday.  A fellow student told her about it as she returned from lunch.  Stunned, she went straight to history class where the teacher plugged in a radio and students heard history in the making.

As a rookie newsman at an Indiana radio station, I helped report the story that day.   I can still hear the frantic ringing of the "bulletin bell" on the United Press teletype machine as it chattered out the breaking news.  The first "flash" came down the line just as I was getting ready to get off work.  It would turn out to be a very long day.  The station manager and I took turns airing the bulletins that began with a brief one-sentence report of "shots fired on the Presidential motorcade" and ended with the announcement of the death of the 35th President of the United States.

The events of Tuesday, September 11, 2011, created indelible memories for people around the world.  Each of us can recall the day as if it were yesterday.  I was administering the I-STEP test to a group of high school students.  As they quietly worked their way through the exam, I checked my e-mail on the computer at my desk.  A message from the tech advisor stated that it would be difficult to access the internet because of "some problem in New York."  Nevertheless, I found an online news channel almost immediately.  The tragedy unfolded before my eyes as students calmly filled in the circles on their test sheets.  I had a strong impulse to yell "Time out!" to tell them what was going on.   I thought better of it.  The test was important.  The silence continued as students marked the papers, oblivious to the tumult of the outside world.

When the finish time finally came, I quietly told them all I had learned about what had occurred that morning.  I knew they were going straight to lunch in the cafeteria where rumors would abound.  I wanted them to hear the facts first.

In the years since this national trauma, we have become sadder and wiser, more cautious, more suspicious, and, yes, a little more nervous about the world around us. 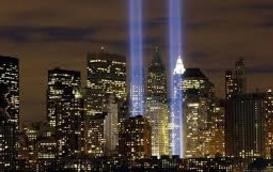