My what pretty handwriting you have!

That's the best compliment you could receive when I was in school, although I personally seldom heard these words.  My writing became more of a scrawl sometime around the seventh grade.  Not that I wasn't taught how to write correctly.  We all were.  We practiced it diligently every day.

It was called "cursive" writing.  Considered an important life skill, it was the "'Ritin" part of the three "R's" in education (along with reading and 'rithmetic.)   Young writers spent many hours perfecting their loops and swirls.  Awards were given for "penmanship."

Like hornbooks, ink pens and lunch pails, this old-fashioned "R" will soon be history.  Indiana schools are no longer required to include cursive writing in teaching standards.  We can see the handwriting on the wall, and it is not the familiar green banner across the top of the blackboard that once displayed perfect examples of the cursive art.

Pupils will still be taught how to print the letters of the alphabet, but writing is all about keyboarding now.  Kids as young as five or six are typing away on laptop computers.  If they want to use cursive, they have the option of selecting one of a variety of script fonts available in their software.

It was bound to happen.  In this global digital world, there is so much more for children to study in school.  Standardized test requirements force teachers to carefully weigh every minute of instruction time.  Cursive writing is no longer important enough to warrant the time.

The move away from cursive is part of the evolution of the written word.  People did not always write in a cursive style.  It, too, was once a new idea in education.

Two centuries ago, the smooth, fluid letters met the need for more speed in writing.   "Spencerian Script" was the predominant method by 1850.   Developed by a man named Platt Rogers Spencer, it was a style that could be written fairly rapidly while presenting an elegant appearance. It caught on in schools and occupied a central part of the curriculum of little red schoolhouses across the nation.

We see examples everyday.  One of the most famous brands  in the world, Coca-Cola, flows across millions of cans and bottles in Spencerian Script.  The graceful letters that identify the Ford Motor Company are also in this cursive style.

A change came in the late 1800s.  Again in a nod to speed, teachers adopted a method devised by Austin Palmer.  The Palmer method was plainer and faster than Spencerian, and it became the mainstay of writing practice in the 20th century.

Time marches on.  Handwriting methods are passé.  Machines do our writing now.   We can communicate our thoughts more efficiently, more legibly, and certainly more easily by tapping on plastic keys.

It is a sad parting of the ways for many of us.  For the sake of speed and convenience, we are giving up something beautiful and romantic.  It's hard to imagine a computer-generated love letter touching the heart quite the same way as a sweet missive lovingly crafted in scripted ink.

Social conventions will have to change.  Miss Manners has long advised us to send handwritten "thank you notes" in cursive style.  In a recent column, she mourned its passing and yielded to the idea of a note in hand-printed letters.  Be assured, however, that a note in computer font will always be a faux pas in her etiquette book.

Perhaps to satisfy mortgage companies, teachers will continue to show students how to sign their names in cursive.  It's nice to know that youngsters will still be able to write their own "John Hancocks" (a phrase that undoubtedly will go completely out of style if it hasn't already.)

This may be a chance for parents to help out.  As it has always been a good idea for parents to read to their children, now it might be a great plan to teach them the beauty of cursive writing.  Practice making those graceful letters.  Take turns reading letters from grandma or Aunt Mary.  Try reading old documents.  Take a look at that famous one penned by Thomas Jefferson.

Cursive is language writ large in the lives of an older generation.  Let's help the children hold onto it. 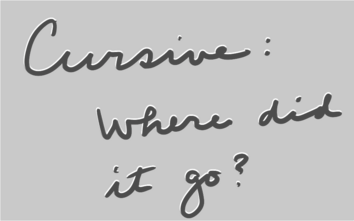