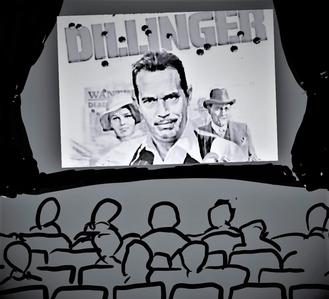 A dapper young man, sporting a straw hat, long dark coat and light grey trousers, strolls into the lobby of a small town bank.  Only one teller is on duty.  He steps up to her window.

“Is the president here?” he inquires politely.

The man gives her a lop-sided grin.  “Well, honey, this is a holdup,” he says, pulling up a long, blue-barreled gun.  With that, he leaps over the counter, Douglas Fairbanks style, and requests access to the vault.

It wasn’t Douglas Fairbanks, and it wasn’t a movie.  The “star” of the scene was John Dillinger, the teller was Margaret Good, and the location was the Commercial Bank of Daleville, Indiana.  On that July day in 1933, Dillinger was playing the opening scenes in a life destined to end up on the silver screen.  The movie, “Public Enemies,” gives the Hollywood treatment to the Hoosier bank robber.  Dillinger, sometimes called “Gentleman Johnny,” is played by a brooding young actor with the same initials, Johnny Depp.

Dillinger would be pleased.  Growing up in Indianapolis and Mooresville, he liked reading romanticized tales of the Wild West.  His hero was Jesse James.  Young Johnny admired Jesse’s unflinching courage, as well as his chivalrous attitude toward women and children.

Early in his adult life, the city of Franklin was the location for a “cameo role” for Dillinger.  No, he didn’t rob a bank.  That would have been difficult, under the circumstances.  On his visit to the Johnson County Courthouse on October 15, 1924, he was already in police custody.  An inmate at the Pendleton Reformatory, he had been brought to town to testify against Ed Singleton, his accomplice in the assault and robbery of a Mooresville grocer.

Few in the city took notice of the event.  Dillinger, only 21, had not yet earned infamy.  The Franklin Evening Star devoted a few lines to the court proceedings, but only Singleton was mentioned by name.

Perhaps Dillinger got a glimpse of the Artcraft Theater on that Wednesday afternoon in 1924.  The theater, built two years earlier, was running all the latest silent movies.  The marquee that day would have billed the feature attraction as “George Washington, Junior,” a comedy based upon a stage show written by George M. Cohan.

On the way back to Pendleton, Dillinger broke away from his guard in Indianapolis.  He was soon recaptured, but the incident served as a preview of things to come for the man who would someday be declared “Public Enemy Number One” by J. Edgar Hoover.

Dillinger spent five years at Pendleton before being transferred to the state prison at Michigan City.  After four years in the “big house,” he was granted a parole by Governor Paul V. McNutt (who was born in Franklin.)

Finally back in society, Dillinger was soon making national headlines.  For 13 months, he and his gang terrorized the Midwest, staging brazen bank robberies, blazing away with machine guns, and sometimes taking hostages, most of whom were kindly treated.  One frightened teller, forced into the getaway car, was courteously let out in front of her own house.

The Dillinger boys liked those theatrical flourishes.  They actually discussed the great movie that could be made of their exploits.   Indeed, one of their most creative heists took place at the Security National Bank in Sioux Falls, South Dakota.  Gang member Homer Van Meter had gone into town pretending to be a Hollywood producer.  The next day, Dillinger and his crew scooped up $49,000 from the bank vault while gangster Tommy Carroll stood outside, machine gun in hand, entertaining a crowd of citizens, including the chief of police, who thought they were watching a movie in the making.  The gang got a clean getaway, helped in great part by the fact that they stopped outside of town and scattered roofing nails all across the road.

The show ended on July 22, 1934.  On that night, Dillinger and a girl friend went to the Biograph Theater in Chicago to see Clark Gable in “Manhattan Melodrama.”  In the film, Gable plays a crook who ends up facing execution.

Coming out of the theater, Dillinger’s friend purposely stepped aside.  She had betrayed him to the FBI.  Seconds later, still under the chasing lights of the theater marquee, John Dillinger was cut down in a hail of bullets from “tommy guns.”