It was in March of 1957 that Governor Harold Handley signed a bill which designated the peony as the official state flower of Indiana.  The act surprised a lot of Hoosiers.  Suddenly uprooted was the reigning state flower, the zinnia.

What followed was quite a tempest in a flower pot.

It is a tale that smells of  intrigue.  C. G. Milne, garden editor of the Indianapolis Star, blamed the flower switch on a "small cult of zinnia-haters."

Perhaps a little history is in order.  Every state in the union has an official flower, from the camellia in Alabama to the Indian paintbrush in Wyoming.  Back home in the Hoosier State, we can't seem to make up our minds.  In 1913 we picked the carnation.  Ten years later we favored the tulip tree blossom.  Then, in 1931, lawmakers gave the nod to the zinnia.

Motives for these changes seem to be lost in the mist of time.  There appears to have been a trade-off in 1931 when we dropped the tulip tree blossom as the state flower.  In that same year, the tulip poplar became the official state tree.  That probably salved the hurt feelings of tulip blossom fans.

Zinnia lovers were caught off guard when the flower switch came in 1957.  The director of the Farm Bureau pet and hobby clubs put up a protest.  "We have 650 clubs with about 10,000 members," she complained, "and one of our projects for years has been to provide the children with zinnia seeds to grow.  Imagine the children growing peonies!"

Officials at Indiana National Bank had already ordered huge amounts of zinnia seeds to be given out at the Indianapolis Home Show that year.  They could not cancel that order, so they carried on.

What was wrong with the zinnia?  Those in favor of the peony suggested that the zinnia was not a native plant.  After all, its roots are in Mexico.  They had no grounds for their choice, though, since the peony pedigree traces all the way to the Orient.

The plot thickens in a newspaper story published a few days before Governor Handley signed the peony papers.  It seems that during the legislative session that year, a flower change was afoot.  Someone had sown seeds of discontent.  Evidently a good deal of time was spent on the issue, and the Senate Public Policy Committee finally revealed its choice.  The state flower would be the dogwood blossom.

At that point, some old fashioned-politics took over.  The newspaper said that a representative from Kendallville persuaded members of the Assembly to amend the dogwood decision.  It was simple.  All they had to do was remove the word "dogwood" and insert "peony."  Perhaps it was only a coincidence that this particular member was a commercial grower of the newly-adopted blossom.

Zinnia lovers did not go down without a fuss.  Letters to editors were dispatched to newspapers all around the state.  Someone waxed poetic in a Columbus paper:

Somehow the men seem quite impelled, the zinnia to discard,

As Indiana's flower, and I think they should be barred. . .

Indiana is a proud state, colorful and strong

And sturdy as a zinnia, somebody's done her wrong!

As they say, time heals all wounds, even unkind cuts made to the stalwart zinnia.  Nearly six decades after the flower fray, Hoosiers have embraced the peony.  Its large, lovely blooms of pink, red, and white appear right around Memorial Day, in time for trips to the cemetery and the 500-Mile Race.

Of course, as favored as the peony might be, there is still no law against zinnias, carnations, roses, and all the other colorful creations Mother Nature bestows upon the Hoosier landscape.

At the end of the day, lawmakers learned a botanical lesson.  If a flower bill ever comes up again, it will likely be nipped in the bud.


The Indiana State Flower, and How It Got That Way 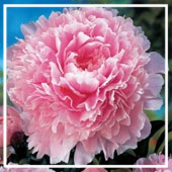