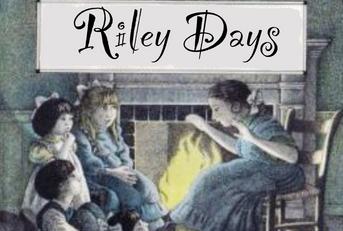 Don't Read This Until October

As days grow cooler and nights come sooner, as maple leaves turn to gold, as five-pointed sweet gum leaves seem to burst into flame, Hoosiers can't help but think of James Whitcomb Riley.  It's fitting that he was born in October.

Autumn is the time for Riley.

When the heat of summer’s over and the coolin’ fall is here.

Kids of my generation grew up on the “Hoosier Poet.”  We loved to hear “The Raggedy Man” (He “works fer Pa, an’ he’s the goodest man ever you saw.”)  We laughed and laughed at a boy named Alex who told “The Bear Story,” which grew more fantastic the longer it went. “An “t’uz a bear! A grea’ big shore-nuff bear! – No:  ‘t’uz two bears, it wuz – two great big bears!”

And then, of course, there was “Little Orphant Annie.”

Little Orphant Annie’s come to our house to stay

To wash the cups and saucers up and brush the crumbs away.

The most famous of Riley’s poems, “Annie” appeals to kids even today.  It’s mysterious and a little scary, with supernatural events on par with Harry Potter.

A little boy who wouldn’t say his prayers at night seems to disappear into thin air.     A little girl who made fun of people and mocked her elders is apparently snatched through the ceiling.

Back before television and cell phones and DVD’s, there were story tellers.  Good ones could keep kids spellbound as well as any electronic marvel of today.  When little Jim Riley was growing up in Greenfield, an orphan girl named Mary Alice Smith was employed to help with chores around the house.  Nicknamed “Allie,” the young girl had a fertile imagination.  Perhaps to forget her own sad plight in life, she made up a world of sprightly fairies and pixies.  When her work was done, she shared her imaginative stories with Jim and his siblings.

An’ all us other children, when the supper-things is done,

We set around the kitchen fire an’ has the mostest fun

An’ the Gobble-uns ‘at gits you ef you don’t watch out!”

Riley never forgot the “hired girl’s” enchanting tales.  Years later, after he had become a literary star, he remembered her in a poem he first called “The Elf Child” and then “Little Orphant Allie.”

Whether it was a typesetter’s faulty eyesight or Riley’s imprecise handwriting, “Allie” was mistaken as “Annie.”  The poet made an effort to “stop the presses,” but it was too late and “Allie” has been “Annie” ever since.

After the poem’s huge success, an effort was made to locate the orphan girl who had helped spark Riley’s imagination.  She was found living in the little town of Philadelphia, west of Greenfield on the “National Road.”  Her married name was Mary Alice Gray.  She was invited back to Riley’s childhood home, where she recalled the names of the pixies who in her imagination had lived under the steps leading to the second floor.

For the rest of her life, Mrs. Gray was in demand as a visitor to schools, where she talked not about herself but about the genius of Riley.  After his death in 1916, friends of the celebrated author raised funds to build a children’s hospital in his honor.  The Riley Hospital for Children was officially dedicated on the poet’s birthday, October 7, 1922.  Although in failing health, Mary Alice Gray was an honored guest at the ceremony.

Autumn in Indiana is crispy, cool and colorful, lovely in a bittersweet way.   In the words of Little Orphant Annie, it’s a time “when the blaze is blue, and the lamp-wick sputters, and the wind goes woo-oo!  And you hear the crickets quit, an’ the moon is gray, an’ the lightnin’ bugs in dew is all squenched away.”

These are Riley days in Indiana. 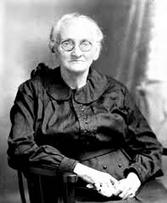 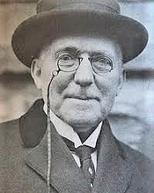