Yes, kids still get sent "to the office"

They may not be recommending you for a job 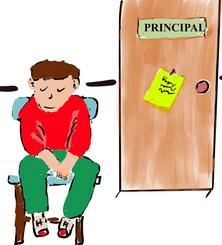 “No need for him to come back to my class.  Please banish from the human race and exile accordingly.”

So wrote a high school teacher on a recent student referral form.  Teachers everywhere will agree that this is not the best way to describe why a student is being sent to the office.  But most of us will probably nod and smile, recognizing familiar frustrations that are everyday events when dealing with adolescents.

The teacher in question later told the boy’s mother that the note was meant to be sarcastic.  He added that he had had a bad day.  Anyone who has taught school can sympathize.  We have all had students whom we thought were part of some vast conspiracy to drive us out of the classrooms, if not our minds.

Student behavior comes under the category of “classroom management.”  Teachers are expected to handle as many problems as they possibly can without calling for outside help.  Most schools have a step-by-step discipline strategy.  It compares to a “three strikes and you’re out” plan.

If the student runs through the options without any noticeable improvement in behavior, he or she will be referred to a dean or vice-principal.  This usually entails filling out the dreaded referral form.

Sometimes, of course, the behavior is so egregious that more immediate action is necessary.  Maybe the student has instigated a fight with another student.  Maybe words were spoken that could not be left hanging in the air without immediate response.  Maybe insolence or disrespect has risen to such levels that the only recourse for any self-respecting teacher is to firmly plant the feet, sternly point to the door, and resolutely proclaim, “Out!”

Even though the student in this case leaves the room immediately, a paper trail must follow.  The teacher should allow a little time to pass before setting pen to paper on the referral form.  I suspect the teacher in Anderson did not allow himself this “time out” period.  A short coffee break might have done wonders to his sense of perspective.

College teacher prep programs should probably include a special unit on the art of writing referral forms.  It is certainly a skill worth learning.  The basic rule is to follow Sergeant Joe Friday’s policy on the old “Dragnet” show:  “Just the facts, ma’am.” The teacher should describe precisely the deeds or words which catapulted the student out of the room.  Emotions should not influence the text of the message.  It is doubtful that the dean or vice-principal is interested in any opinion regarding the student’s standing among the human race.

I once proposed an idea about referral forms that I could never talk administrators into adopting.  I suggested that students ejected from the classroom and landing unceremoniously in the office should fill out their own referral forms.  Before the miscreant was called into the office to hear the dean read the charges submitted by the teacher, he would have a chance to explain his side of the case.  Why were you dismissed from class?  What would you do differently?  What do you think should happen now?

This idea appealed to me as an English teacher.  Talk about purposeful writing.  I could see a kid harnessing all of his prose power to plead his case on paper.  The school could hardly provide a higher inspiration for creative writing.  Who knows how many budding Ernest Hemingways or Virginia Woolfs we might have found cooling their heels outside the dean’s door?

Perhaps students would be encouraged to use humor in their self-referral forms.  Teachers have been using it for years in their assessments of student behavior.  Here are a few comments found on report cards issued in New Your City:

Since my last report, your child has reached rock bottom and started to dig.

Your daughter sets low standards and then consistently fails to achieve them.

The gates are down, the lights are flashing, but the train isn’t coming.

The Feds have given us permission to leave your child behind.

The teacher who wrote the referral in the first paragraph has been reprimanded, but the superintendent says that his job is secure.  That’s good.  There’s nothing wrong with having a sense of humor.  In fact, it’s a vital requirement for any teacher.  We simply must be sure that we employ it in such a way that it leaves everyone, including students, laughing.