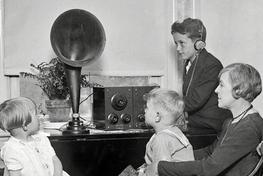 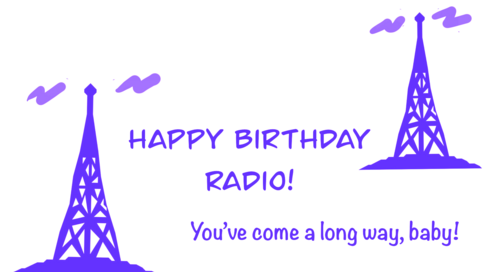 Happy Birthday, Radio!  It was in 1920 that KDKA went on the air in Pittsburgh and the air hasn't been the same since.  It all started, of course,  with an idea.

“I have in mind a plan of development which would make radio a ‘household utility’ in the same sense as the piano or phonograph.”  So wrote a young telegraph operator in a memo to his superiors at the Marconi Wireless Company in 1916.  He went on to propose a “radio music box” which could be placed in a parlor or living room.  That way, he said, listeners could enjoy concerts and lectures, and perhaps even hear baseball scores transmitted through the air.

The young man’s idea was promptly rejected by the Marconi Company.  But David Sarnoff didn’t give up.  His wireless music box eventually took him to the top of Radio Corporation of America.

Radio took off with the roaring 20s.  In the beginning, no one quite knew where it was going.  Some thought nowhere.  “The radio fad will die out in time,” said Thomas Edison, who was busy making light bulbs, phonographs, and silent movies.

Wireless broadcasting in the early days utilized AM (amplitude modulation.) Although limited in fidelity and subject to interference, the AM signal could travel great distances.  A huge audience tuned in day and night for music, comedy, drama, concerts, quiz shows, news, and sports.  The “golden days” of radio extended from 1920 through the early 50s.  The party ended when television sets replaced console radios in living rooms across the country.  That’s when radio began a process of re-inventing itself which continues to this day.

In the 1950s engineers perfected an improved method of radio transmission called frequency modulation.  The higher range FM signals offered better fidelity to the discerning ear.   In addition, they were not subject to the static and interference problems on AM.  Despite the advantages, the new FM band was slow getting started.  Consumers were spending their money on new TV sets, not new radios.  Owners of the new FM stations had a hard sell when seeking listeners and sponsors.

All of this came to mind when WIBC, a long-time “powerhouse” on the AM band, announced that all of its programming will be transferred to an FM sister station.

“Not many people under the age of 40 grew up with AM radio.  More people are listening to FM than AM,” said Tom Severino, Vice-President of Emmis Broadcasting.

It is sweet irony for those of us who were around radio 60 years ago when FM was trying to get a foot in the door.  There were few FM radios in homes and none in cars.  Colleges and universities had adopted FM for their student stations, and most of them were programming classical music.  In Indianapolis, Bach and Beethoven dominated the “hit list” at WAJC, the Butler University station.  WFMS, a commercial outlet, published its classical broadcast schedule in a monthly magazine called “The Beacon.”

Still in my teens, I was disc jockey, newscaster, engineer, copywriter, and time salesman for a fledgling FM station in the early 60s.  We were playing easy listening music, with an emphasis on the big bands.  Many people were under the impression that all of FM was non-commercial.  Businessmen gave me a wary eye when I proposed advertising packages to run on the station.  Others were under the impression that the new radio band was strictly for classical music.  One station in town had established the concept that FM stood for “fine music.”

We were pioneers in a way.  Our station inaugurated stereophonic broadcasting in Indiana.  Other stations followed.  The superior sound quality of FM slowly began to win over larger audiences.  A huge breakthrough came when the Federal Communications Commission passed a law requiring all radios to pick up both AM and FM.

Those of us who championed FM in those early years can cheer the recent move by WIBC.  We seem to have won the battle of the broadcast bands.  However, AM stations are not about to disappear.  WIBC AM, for example, will find a whole new audience as an affiliate of ESPN.

Radio is good at re-inventing itself.  That’s how it has remained a player in the complex media world of the 21st century.

Thomas Edison would be surprised.