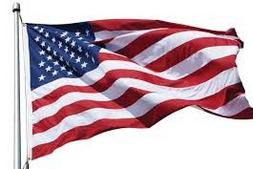 To Celebrate Everything For Which It Stands

Resolved.  That the flag of the United States be made of thirteen stripes, alternate red and white; that the union be thirteen stars, white in a blue field, representing a new Constellation.

With these words, the Second Continental Congress created the American flag.  The banner our founding fathers designed now proudly waves everywhere across the country, from sea to shining sea.

Let's talk about it.  The old flag is approaching its 250th birthday.    It has become so familiar to us that we often pass it by without much thought.  It's often just part of the backdrop at ballgames and parades.   Perhaps we should take a closer look at “Old Glory.”

Although legend tells us that the first flag was made by Betsy Ross, her role is in doubt.  Historians think the Philadelphia seamstress might have shown George Washington how to cut out a five-pointed star, but they say there is little evidence that she actually created the first stars and stripes.

No matter.  Our grand old flag is bigger than any one person.  Charles Evans Hughes, a Chief Justice of the Supreme Court, described it as “the symbol of our national unity.”  He said, “It tells you of the struggle for independence, of union preserved, of liberty and union one and inseparable, of the sacrifices of brave men and women to whom the ideals and honor of this nation have been dearer than life.”

Americans love their flag.  School children pledge allegiance to it, poets sing its praises, soldiers salute it, and they die for it, too.   It’s the “star-spangled banner” that Francis Scott Key saw “gallantly streaming” through the “rocket’s red glare” and “bombs bursting in air.”  It would be immortalized by marines at Iwo Jima and hoisted high by firemen at ground zero in New York City.

June 14 was officially designated as Flag Day by President Woodrow Wilson in 1916.  However, the holiday had been observed for many years before that.  A Wisconsin schoolteacher named B. J. Cigrand  promoted the observance of our “flag birthday” as far back as 1889.  That was at about the same time that Hoosier President Benjamin Harrison declared that the stars and stripes should fly everyday over schoolhouses and government buildings.

In the rush to the Fourth of July, June 14 often comes and goes before we realize it.  Of course, there is some powerful flag waving on the Fourth, when Old Glory is in the spotlight amidst brass bands, picnics, and fireworks.  But there is still a place for Flag Day, an occasion not so much for celebration as for contemplation.

Let Old Glory fly quietly on Flag Day.  As she softly waves in the breeze, think about what the flag means to you.  Ponder the words of Justice Hughes:  “The flag means America first, an undivided allegiance.  It means America united, strong and efficient, equal to her tasks.  It means that you cannot be saved by the valor and devotion of your ancestors; that to each generation comes its patriotic duty.”

As a matter of fact, let's make every day Flag Day.