Thoughts from the Teacher in a Driver Education Classroom

Prayers for the Road 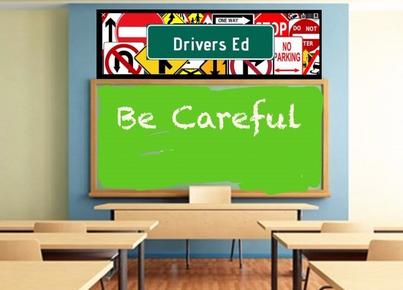 That’s why I considered it an important mission when I agreed to teach the classroom portion of a driver education course to high school freshmen.  I saw the job as a chance to help keep young drivers from becoming statistics.

On the first day, my students glowed with adolescent enthusiasm about this important event in their lives.  Getting a driver’s license is a rite of passage in America.  It is not just a photo ID.  It’s a ticket to independence and adulthood.

The Indiana Driving Manual stresses that driving is a privilege and not a right.  It’s a privilege that carries a huge responsibility.  That was the first point I tried to make to the students in my class.  I told them that, though many were not yet 16 years old, they were not “kids” anymore.  They would be in charge of  3000-pounds rolling down the road at a mile a minute.  That’s not a task we entrust to kids.

Of course, I told them the facts.  I told them that 63% of teenage passenger deaths take place when another teen is driving the car.  That 41% of fatal crashes involving teenagers take place at night.  That 21% of young drivers killed in fatal crashes had a blood alcohol content of .1 or higher.  That the overwhelming cause of all automobile accidents is human error.  (2004 statistics.)

Yes.  I gave them the cold, hard facts.  I showed videotapes about the techniques of safe driving, the importance of wearing safety belts, the need for full attention to the driving task, and how to handle almost every conceivable driving hazard.  We saw film footage of real accidents and discussed how they happened.   We studied computer-generated recreations of common traffic situations.  We talked about the best ways of handling tailgaters, slow pokes, speed demons, stoplights, railroad crossings, slick roads, semi-trucks, motorcycles, bicycles, mopeds, and pedestrians.

We studied our textbook, with 18 chapters covering everything from adjusting mirrors to changing the oil.  Students memorized the shapes and colors of all the traffic signs.  They learned about the IPDE process of safe driving (identify, predict, decide, execute.)  They studied gravity and energy of motion and friction and traction.  They learned how to steer and brake properly, how to make safe turns, and how to drive on city streets and interstates.  They learned stopping distances and speed laws, how to safely change lanes and judge gaps in traffic, and how to maneuver through complicated intersections.   And, yes, they learned how to parallel park.

Now that they have finished the course, they are the most educated drivers on the road.  When they go to the license branch, they will pass the written exam with flying colors.  They will pass the driving test, too.  I am confident they know their stuff.

What I am not so positive about is how they will behave once they get their licenses.  How will they act behind the wheel when their driver education class is just a memory?  How will they drive with friends in the car on the way to a party on a Friday night?

In class, we discussed the dangers of emotions and peer pressure in driving.  We talked about the high level of risk-taking among teenagers.  We emphasized the perils of drinking and driving.   At the time, they smiled knowingly and assured me that they would always drive carefully.  I wanted very much to believe them.

When the final class was over,  we said our goodbyes.  I shook their hands and wished them success.  As I turned out the lights and shut the door,  I prayed that I had done my job.