It is hard to believe that nearly 60 years  have passed since Dr. Martin Luther King, Jr. delivered his famous “I Have a Dream” speech.

For some of us, the summer of 1963 seems like yesterday (or at least the day before.)  In our memories, there was magic in those warm days of long ago.  For my friends and me starting our lives in Central Indiana, life was beautiful.

The skies were blue everyday.  We had jobs, cars, a few bucks in our pockets, and a shiny new world to play in.  Burger Chef had just opened their doors in town.  It was so easy to step to the window and grab a burger, fries, and Coke - all for 45 cents.  For “fine dining,” we dressed up a little to eat at the Key West Shrimp House on Madison Avenue or, to mingle with high society, the King Cole downtown.

We took our dates to movies at the Lyric, Indiana, Circle, or Keith’s Theaters.  We tried to get there before 6:00 when tickets were 50 cents.  Sometimes we piled into a Chevy Impala or Buick Roadmaster to spend an evening at the Greenwood, Meridian, or Twin-Aire Drive-In Theaters.  Those were good places to see the scary new movie of the year, Hitchcock’s “The Birds,” in between runs to the refreshment stand for frozen malts and “drive-in” pizzas.

We cruised the Southside on Saturday nights, after we pumped a dollar’s worth of ethyl (four gallons) at the Wake-Up Station.  We would join the parade of cars crawling down Madison Avenue between the TeePee and Southern Circle drive-in restaurants.  The "Big Chief" was the burger of choice at the TeePee.

On hot afternoons, we swam at the Longacre Pool or rode the Flash and lots of other rides at Riverside Amusement Park (all day for $1.00.)

For a cool evening’s fun, we whacked our way through the castles and windmills at Rustic Gardens Miniature golf course.  For more intense excitement, we drove out to Weir Cook Airport to watch the planes takeoff and land.

Of course, we sometimes just stayed home to watch one of the city’s four television stations.  We could start the day with Debbie Drake’s exercise show on WISH. At noon, we might flip to WLW-I for Ruth Lyons and her popular 50/50 Club. For an afternoon movie, we watched Frances Farmer on WFBM.  The kids loved WTTV and their daily broadcasts of Popeye and Janie and Happy Herb.   Everybody laughed at Uncle Jed, Granny, Jethro, and Ellie Mae on the top network show, “The Beverly Hillbillies.”

Radio provided the soundtrack for our lives.  We listened to records spun by the “Doctor of Discology,”  WIBC’s “Bouncin’” Bill Baker, or “Uncle” Wally Nehrling on WIRE or Glenn Weber and Joe Pickett on WFBM.  We snacked on Artie’s potato chips and RC cola during Easy Gwynn‘s “Take It Easy” show in the afternoons.  If we were downtown at noon, we stood outside the Circle Theater and played the "Pick-a-Pocket" quiz with Jim Shelton.

There was music in the wind that summer, provided by Jan and Dean, Paul and Paula, Bobby Vinton, Lesley Gore, and the Chiffons.  We danced our way through the endless days, soaking up the sunshine, going where we pleased, sampling joys of life wherever we found them.  We schemed and planned, imagining what we would do and where we would go with our lives.  Our future was full ahead of us, wide open as the new interstate highways which we just beginning to stretch across the great land.

The years have rolled swiftly past, and, looking back, the summer of 1963 seems to have been simpler, more innocent, and more fun than any we have had since. In the fall of that year, the whole world turned a corner.  On October 31 a propane gas explosion at the Indiana State Fair Coliseum killed 74 people and injured nearly 400 more.  Just three weeks later, John F. Kennedy was assassinated in Dallas.   Dark clouds seemed to take up permanent residence overhead, accompanied by rumblings from Vietnam, protestors, flag burnings, Kent State, and an angry new world.  The summer of ’63 vanished into mist like Brigadoon.

Dr. King did not survive the storm.  His dream, however, lives on.  I understand it better now than I did six decades ago.  I did not realize it at the time, but my friends and I were already living out that dream as it beckoned and shimmered in those golden summer days of 1963.  How lucky we were. 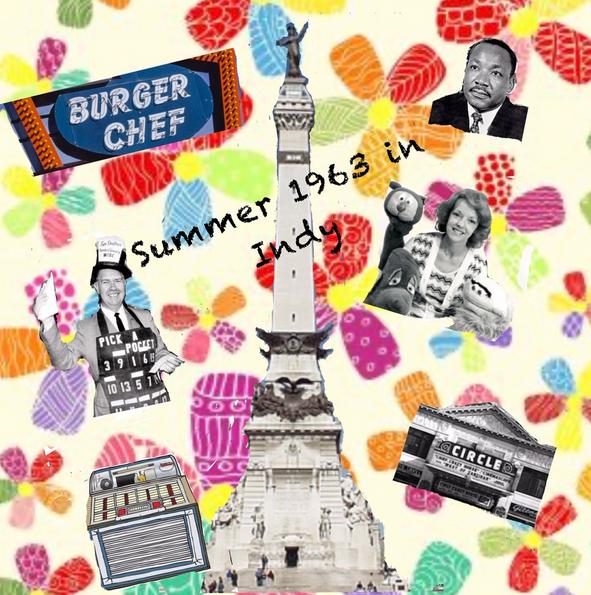