Methinks He Needs Some Winks 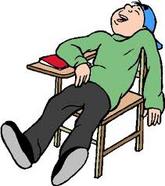 A teacher at Greenwich High School in Connecticut has an idea that will get the stamp of approval from most teenagers today.  He has started a Power Nap Club.  The members meet every Monday after school and promptly get down to the business at hand:  sleeping.  The club is gaining in popularity at the school, which is in a wealthy community where students feel a great deal of pressure to stay on top.  The club logo shows the school mascot, a cardinal, wearing a nightcap.  They even have a Latin motto:  “Veni vidi dormivi - I came, I saw, I slept.”

The club is no joke.  Today’s students are sleep deprived.   Young people are trying to cram homework, sports, part-time jobs, and a variety of social activities into a schedule where the only flexibility is at night, during sleep time.  The result is too few hours of rest.

Most study hall teachers long ago gave up the effort to keep students awake.  Many have decided that sleep might just be the best thing a kid can get done in study hall, where some go into a deep slumber which is not even disturbed by the bell at the end of the period.  Often the teacher must gently roust the student out of his snooze so that he can go on to the next class (where that teacher will not look so kindly upon dozing at the desk.)

Concerned parents often ask teachers what they can do to help their children do better in school.  Perhaps the answer is as simple as establishing a “lights out” policy at home.  Teens often stay in their bedrooms all night watching television, playing video games, surfing the Internet.  In short, they do everything but sleep.

It is a sign of the times.  Studies have shown that most of us are not getting enough sleep at night.  Perhaps we can blame it on Thomas Edison.  Before he invented the light bulb in 1879, people got about ten hours of sleep every night.  It wasn’t much fun staying up by candlelight, so people generally went to bed shortly after sundown.

Experts estimate that the average American today gets little more than six hours of sleep each night.  They say a good eight hours of rest is needed in order to be mentally alert and physically energetic the next day.  In other words, you should spend about a third of your life in bed.  It sounds like a lot of time spent sawing logs, but it’s an issue of staying healthy and alert.

March each year is Sleep Awareness Month.  It is sponsored by the National Sleep Foundation in an effort to promote the importance of quality sleep.  The campaign coincides with the beginning of Daylight Saving Time, when most of the nation turns the clocks forward one hour and therefore risks losing 60 minutes of sleep.

Sleeping is such an easy thing to do, it’s a wonder we don’t take time to do more of it.  The animals know its importance.  Our feline friends invented the catnap.  Dogs can snooze the day away.  Horses doze standing up.  Even our home computers are programmed to “go to sleep” once in a while.  In this fast lane, electric light world, we must remember that we humans are “wired” for a slower era, when spending a long night in bed was just about the only thing to do when darkness fell.  It’s what we need to do for physical and emotional good health.  As William Shakespeare wrote, sleep “knits up the raveled sleeve of care.”

With the Bard’s blessing, those members of the Power Nap Club can probably catch a few winks in English class, too.

Sleeping in class may now be part of the lesson