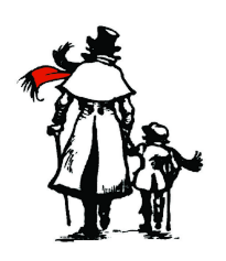 Wasn't Such a Scrooge After All

“List some adjectives that describe Scrooge,” I said to my 10th grade English class.  It seemed a timely topic for the week before Christmas.

Without hesitation their pens and pencils went to work.  There was no scratching of heads.  No hands went up in search of further explanation.  This was a slam-dunk.  They had a lot of words that described old Scrooge.

Mean, miserly, grumpy, stingy, cold-hearted, unfriendly, hateful...and those were just for starters.  Selfish, crabby, unkind, cheap...how the adjectives flowed.  He was labeled a skinfllint, tightwad, grouch, moneygrubber, and the last person you would ever invite to a Christmas party.

Oh, he was a scrooge all right, that Scrooge.   So clearly defined was he that Webster put his name in the dictionary as a synonym for “mean and miserly person.”  Sometimes his picture is even in there, too.

We have been remembering Mr. Scrooge that way for over 170 years, ever since Charles Dickens created him as the main character in A Christmas Carol in 1843.  Reader’s Digest has called it “The Second Greatest Story Ever Told.”  Everyone knows the tale, since it has been made, remade, revised, updated, and parodied more than any other story in English literature.

Ebenezer Scrooge is the man we love to hate.  It’s no wonder that his image has left such a deep impression.  In the words of Dickens, he was a “squeezing, wrenching, grasping, scraping, clutching, covetous old sinner.  Hard and sharp as flint, from which no steel had ever struck out generous fire, secret, and self-contained, and solitary as an oyster.  The cold within him froze his features, nipped his pointed nose, shriveled his cheek, stiffened his gait, made his eyes red, his thin lips blue, and spoke out shrewdly in his grating voice. He carried his own low temperature always about with him;  he iced his office in the dogdays;  and didn’t thaw it one degree at Christmas.”

Scrooge was not one for charity.  He was a great advocate of the workhouses, prisons, and treadmills.  He had no time to care for others.  “I don’t make myself merry at Christmas, and I can’t afford to make idle people merry.”  He only begrudgingly agreed to give his poor clerk, Bob Cratchit, the day off on Christmas.  When his nephew Fred invited him to his house for Christmas dinner, Scrooge replied with his famous “Bah! Humbug!”

That’s how we remember old Scrooge.  But wait.  As Paul Harvey would say, what about the rest of the story?

One cold Christmas Eve in London, Scrooge stepped out into the night air with the ghosts of Christmas Past, Present, and Future.  He stood alone in his nightshirt and witnessed his lost childhood.  He wept as his eyes were opened to the love he had missed.  He cried at the coldness of his heart and sobbed as he saw himself as others saw him.  He awoke that Christmas morning a brand new man and rejoiced at the chance to set the book right, to even the score in the last inning of his life.

“Hear me!  I am not the man I was!” he cried to the ghost of Christmas future.  “I will honor Christmas in my heart, and try to keep it all the year.  I will live in the Past, Present, and the Future.  The Spirits of all Three shall strive within me.”

Dickens said that “Scrooge was better than his word.  He became as good a friend, as good a master, and as good a man as the good old city knew...and it was always said of him that he knew how to keep Christmas well, if any man alive possessed the knowledge.”

The story tells us that old Ebenezer became a second father to the frail Tiny Tim.  He gave of himself and his fortune to the poor people of  London.  Indeed, when he died his name stood for the very spirit of Christmas.

Everyone remembers Scrooge for what he was and not for what he became.  Mean?  Miserly?  Not anymore.  Not after Christmas made him the man he should have been.

May we all be like Scrooge this year.  May we be changed forever for the better and eternally grateful for the chance to start anew.