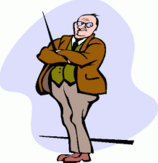 It takes a few years for us to realize who our best teachers really were.

“Who’d you get for English?”

“Higgins,” comes the reply in monotone.

With minor variations, conversations like this have taken place millions of times across America in the past few days.  School is back in session.  Each year at about this time comes one of the most suspenseful moments in any young person’s life.

“Who did you get for your teacher?”

It’s the faculty fickle finger of fate, the teacher lottery, the luck of the draw.

Some kind of natural law is at work.  Fate seems to have decreed that at every level and in every course there will be one teacher who is nice and one who is mean.  Kids have known this for years.  Adults remember it when they were in school.  No one knows why it works this way.  But it does.

It is called Harold’s law.  Seems there was once, many years ago, a lad named Harold who somehow managed to get the wrong teacher every single year from first grade through high school.  At the age of six, on the very first day of school, Harold learned that he had landed in Miss Huffington’s room.  Everybody knew that Miss Huffington lived in the cloakroom, had never been outside the school building in 38 years, and hated little kids, especially boys.  She was maniacal about neatness.  One crayon mark outside the line or one unclosed “o” sent her into nervous spasms.  Mrs. Huffington was nosy, too.   Anytime Harold was absent, she would call home to find out what was wrong with him.

In the second grade, Leroy had Mrs. Thompson, whose husband ran the candy store and who always had a big bowl of hard candy on her desk.  Harold had Mrs. Krukemeier, whose hair stuck straight out like the bride of Frankenstein.  She had a mole on her chin and went into fits if anyone squeaked the chalk while working at the board.  She had a pronounced prejudice against children who slouched in their seats.  Poor Harold sat ramrod straight in class every day that term.  She was nuts about dirt, too.  She checked everybody’s hands before they opened their lunch pails.  Harold’s little hands were scrubbed clean more than once by Mrs. Krukemeier.

Once he got a brand new teacher.  This is usually a good turn of luck.  Brand new teachers are usually young, just out of college.  In their first year they are friendly and slightly gullible, just the kind of teacher every kid loves.

In Harold’s case, though, the new teacher was not young.  No.   He was a man who had experienced a career change.  He had been an Army drill instructor.   His name was Mr. Hawkins and you can bet that Harold didn’t slack off that year.  Mr. Hawkins made it his business to see that Harold got to football practice on time every afternoon.

It was that way for Harold every year.  The odds never fell in his favor.   Every kid loses at the teacher lottery sometimes, but Harold lost every time.

For a writing class, it was inevitable that Harold would be in Mr. Butler’s class. Mr. Butler had ruled room 201 with an iron fist for generations.  “Beady-eye Butler” they called him.  He never missed a thing.  An undotted “i” or an uncrossed “t” spelled doom.  Homework papers had to be folded length-wise down the middle with a sharp crease.  A sloppy fold or tattered corner would land it right back on your desk.  It was that year that Harold was chosen for the newspaper staff.  He was so busy rewriting papers for Mr. Butler that he hardly had time to write for the paper.  It’s a miracle he made editor in his senior year.

It seemed so unfair.  Poor Harold spent his entire educational career under the meanest teachers in school.  He survived, though.  As a matter of fact, he met most of the goals he set for his life.

It was funny.   At class reunions, Harold was the center of attention.  His classmates laughed as he recalled their mean old teachers.  How well they could remember!  They chuckled at the rigid standards and insane demands of those blackboard legends.  They smiled when they thought of how hard they had to work to please those terrible taskmasters.

Tears fell, too, when they realized how much they now loved those teachers that nobody liked.