Who would have known?

“Who said nothing lasts forever?” asks United States Postmaster General John E. Potter.   Not the Post Office.  Their new Liberty Bell stamp, coming out on April 12, is guaranteed to cover the full freight on a first-class letter, not just until the next rate increase, but until the end of the time.

Stamp prices can double and triple, but this one will still stick at the price you paid for it.  It’s called the Forever stamp.  It will sell for 41-cents, the price of all first-class stamps beginning on May 14.  If there is a price increase in future years, the Forever stamp you buy at that time will cost more.   But if you buy one now, it’s good for, well, forever.

Postmaster Potter said the Liberty Bell was chosen to adorn the new stamp because it resonates as one of the nation’s most prominent and recognizable symbols.  These new Liberty Bell stamps represent a chance for postal patrons to get a bargain.  It is probably the first time in history that the Post Office has had a “sale” of sorts on stamps.

Most of us are happy with this new idea.  When postage prices go up, we usually have some old stamps on hand.  That forces us to fumble with sticking two and three-cent stamps on our envelopes until they are used up.  Some of us still have some two-centers lying around from early last year when the price jumped from 37 to 39-cents.

We should have no such problem with the upcoming postage hike.  With the Forever model on the market a month before the price increase, we will avoid the hassle of those pesky small-fry stamps.

It’s too bad the Post Office didn’t think of this before.  A smart man would have stocked up on the Forever stamps of 1932 when they would have sold at 3-cents each.

Postage was pretty expensive in the early days of our country.  The first stamp, issued in 1847, carried the face of the country’s first postmaster, Benjamin Franklin.  It sold for 5-cents.  But for that nickel, Mr. Franklin would carry your letter no farther than 300 miles.  Beyond that, you needed the George Washington stamp, which cost a dime.  Those were reasonable prices for all the trouble it must have been to tote bags of mail via horseback and wagon over the meandering trails and dirt roads of our young nation.

Stamps were pretty cheap for a long time.  They were still selling for just 5-cents when John F. Kennedy became President.  They had risen to a dime apiece by the time Richard Nixon left office in 1974.  There have been a dozen price increases since, with two-and-three cent increases picking up pace in recent decades.

Price hikes were inevitable as fuel and labor costs increased.  This year, even with a 69 billion dollar budget, the Postal Service expects to be two billion in the red.  It goes without saying that stamps will continue to go up in price.  The new 41-cent rate will undoubtedly hold for only a year or two.

That’s why the new Liberty Bell stamp is sure to gain quick acceptance.  In a world of roller-coaster gasoline prices and spiraling medical costs, it’s nice to encounter something that promises to stay everlastingly the same, even if it’s as small as a stamp.

There is a song that says, “On a clear day you can see forever.”  Who knew that Forever would be found at the Post Office? 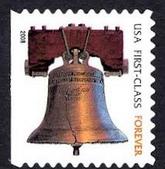