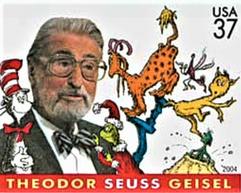 We looked! Then we saw him
Step in on the mat!
We looked! And we saw him!
The Cat in the Hat!

It’s called “Project 236” and it happens at 2:36 p.m. on Friday, March 2.  That’s when everyone is encouraged to find a youngster (or someone young-at-heart) and read aloud from “The Cat in the Hat.”  Why?  Because it’s the 103rd birthday of the book’s author, Theodor Geisel (better known as Dr. Seuss,) and the 50th anniversary of the book which became a landmark in children’s literature.  The event, part of “Read Across America Day” sponsored by the National Education Association, is so named because Geisel wrote the text using only 236 different words.  The quirky story about a mischievous, hat-wearing feline came about when Geisel read an article describing the trouble children were having learning to read.  Convinced that current books were boring, he created “The Cat in the Hat,” employing the publisher’s limited word bank of “new reader” vocabulary words.  With those few words he created a whole new planet for novice readers to explore.

Dr. Seuss was not really a doctor.  Geisel donned the title to please his father, who had wanted his son to become a professor at Oxford.  Seuss was Theodor’s middle name and his mother’s maiden name.  After the success of “Cat in the Hat,” the good Dr. Seuss created 43 more book that kids and adults alike found delightfully intriguing, appealingly odd, and pleasantly zany.

“I like nonsense,” he once said.  “It wakes up brain cells.  Fantasy is a necessary ingredient in living.  It’s a way of looking at life through the wrong end of a telescope.”

In addition to the quirky rhythm and rhyme of the text, Geisel drew all of the colorful illustrations for his books.  The characters he created can only be described as “peculiar,” but millions of children have learned to read, and more importantly learned to like to read, by way of such creatures as Horton the Elephant, Yertle the Turtle, the Grinch, and Foo-Foo the Snoo.

Geisel called his drawing “exaggerated mistakes.  He said he drew the way he did because he couldn’t draw.  As a child he had been told by his art teacher that he had very little talent for the subject.  As he grew up, he didn’t receive much more encouragement.  At Dartmouth College, his classmates voted him “least likely to succeed.”

He first tried his hand at children’s books in 1937.  “And to Think That I Saw It on Mulberry Street” was considered too outlandish for children.   It was rejected by 27 publishers before Vanguard Press took a chance with it.  It found an audience in early readers who were drawn to a world outside Dick and Jane.

With titles like “Horton Hears a Who!” “If I Ran the Zoo,” “The Sneetches,” “The Lorax,” and “Oh, The Place You Will Go,” Dr. Seuss became famous.  When publisher Bennett Cerf  bet Geisel that he could not write a children’s book using only 50 words, the result was “Green Eggs and Ham,” which won the bet and became an instant classic.

By the time he died in 1991, Dr. Seuss had sold over 200 million books.   His words had been translated into 15 languages.  His ideas had provided the source for 11 children’s television specials, a Broadway musical, and a feature-length film.  His honors included two Academy Awards, two Emmy awards, a Peabody award, and the Pulitzer Prize for his lifetime contribution to literature.  And the “pretend doctor” had received seven honorary doctorates, including one from Dartmouth.  Dr. Seuss must have loved the irony in that, just as he would love the idea of everyone in America reading “The Cat in the Hat” at the same time on his birthday.  Reading – specifically helping kids learn to read – was what he was all about.

The more you read, the more things you will know,

The more that you learn, the more places you’ll go. 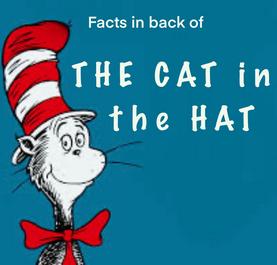