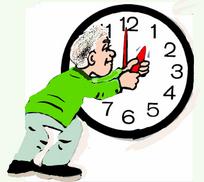 An old song came to mind as we ushered Daylight Saving Time into our home.  It was Chicago’s “Does Anybody Really Know What Time It Is?”

Speaking of time, I spent a good deal of it as I prowled the house looking for anything that requires “springing forward.”  It took a while to reset all the clocks.  I didn’t fully realize how many devices we use that have timers built into them.  There are toasters, telephones, coffee makers, microwave ovens, ranges, video recorders, computers, and calculators, not to mention the wall clocks, mantle clocks, clock radios, and wrist watches we possess.

As I hummed the tune, I also thought of Benjamin Franklin’s “Early to bed and early to rise makes a man healthy, wealthy, and wise.”  Let’s see.  With the time change, will I be going to bed earlier or later?  At any rate, we can thank, or blame, Franklin for the idea that ultimately led to daylight saving time.

It was 1784.  Franklin was living in Paris and definitely not following his own advice about going to bed early.  He habitually stayed up into the wee hours each night and slept very late the next morning.  Like fellow Parisians, he often slept until noon.

As the story goes, a noise awakened him at 6:00 one morning, long before he was ready to get up.  Someone had forgotten to close the shutters on his window, and he was surprised to find the room filled with sunlight.  He was amazed at how much natural light was wasted while people dozed behind closed curtains.  They slept until noon and made up for it by burning candles and oil lamps for six hours after dark.

In a whimsical letter to a Paris newspaper, Franklin parodied his scientific papers and love of thrift.  He calculated the enormous cost involved in the city of Paris with 100,000 families burning half a pound of candles per hour for an average of seven hours per day.  This huge expenditure could be saved, he said with tongue in cheek, by enforcing a few new regulations.  He suggested a tax to be levied on every window built with shutters to keep out the light.  Candles would be rationed to one pound per family.  Guards would be posted to keep people off the streets after sunset.

Franklin went on to recommend that cannons and church bells be used to announce the sunrise each morning to “awaken the sluggards effectually and make them open their eyes to see their true interests…All the difficulty will be in the first two or three days, after which the reformation will be as natural and easy as the present irregularity…Oblige a man to rise at four in the morning, and it is probable he will go willingly to bed at eight in the evening.”

Readers of the Paris newspaper were undoubtedly amused by Franklin’s thoughts, but no one took him seriously and late sleepers continued their practice of closing the shutters to the morning sun.

Note that Franklin said nothing about fiddling with the hands of a clock.   It was an Englishman named William Willett who proposed that idea in 1907 in a pamphlet entitled “The Waste of Daylight.”  Franklin would have been pleased.   He would have come up with a saying such as “He who takes time to change the time will see the light” or something like that.   At any rate, we should be glad that history has forgotten his suggestion to ring bells and fire cannons each day at sunrise.

After I thought I was finished with the job of springing forward, I remembered the timer on our lamp post, the car clocks, and the ballpoint pen that has a little clock built in.  It was about that time that another tune came to mind.  It was an old Guy Lombardo song:  “Enjoy yourself.  It’s later than you think.”