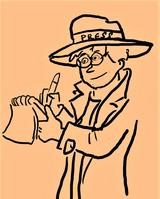 And who's responsible when they're not?

A local school board has wisely adopted a policy that subjects all school-sponsored publications to administrative review.  This means that the board, superintendent, and principals will have the final word on what is printed in school newspapers and yearbooks. As one who has been involved in all types of school media, I can say, “Been there, done that.” The school board is doing the right thing.

Of course, critics are disturbed about issues involving freedom of speech.  Some contend that budding writers deserve full reign to publish just about anything their young minds think the world needs to read.   After all, isn’t a journalist supposed to “shake up” the establishment, expose evil, and rally readers to a noble cause?  As in many questions in life, the answer to this one is, “Yes, but.”   Knowing when to “shake up” and when to “shut up” often depends upon more experience than most students bring to the table.

There was a time when student reporters were content to hone their skills by chronicling Billy Smith’s trip to Dayton or the hamster project going on in Mrs. Brown’s room.  Maybe it was Watergate that changed things.  Through a series of articles in the Washington Post, reporters Robert Woodward and Carl Bernstein exposed a scandal and helped bring down a United States President.  Their story, All the President’s Men, became a hugely popular book and movie.  They became poster boys for journalism schools across the land.  Over 50 years later, young writers are still aiming their journalistic lances in all directions, hoping to discover another “gate” to fame and fortune.

What they should remember, however, is that Woodward and Bernstein were not giddily free to write as they pleased.   Their work was subject to administrative review.  They had to answer to editors and publishers.  Their facts had to be documented.  What was written had to be right and they had to be able to prove it.

Is a school newspaper any different?  You wouldn’t have to watch too many episodes of “Law and Order” to know that a school could be held legally responsible for what is printed in a newspaper published under its jurisdiction.  The board members run the program, pay the teacher, purchase the equipment, supply the paper and buy the ink.  It would be hard, indeed, to argue that they are not then responsible for what is printed.

Certainly, administrators do not want to meddle in the daily affairs of a school publication. Decisions regarding story ideas and content should be made primarily by the student staff. Enthusiasm and originality should be encouraged at every turn.  After all, that’s how it is in the “real world” of journalism.   In that same world, however, questions regarding suitability of content would be kicked upstairs to an editor-in-chief or publisher.  If the people upstairs don’t like the story, that’s the end of story.

In the real world of school publications, the school board is the publisher and the school principal is the editor-in-chief.   In their zeal, young reporters can be impulsive and short-sighted.  As the local superintendent stated, they can also be somewhat cruel in an attempt to be clever.  A school newspaper has a relatively narrow circulation, but that does not mean that what is printed can not be hurtful, insulting, and, yes, libelous.

I like to think that in my role as teacher, I was able to guide students to create media stories that had importance and impact.  I also like to think that those same stories were balanced and fair to all involved.  I cancelled many drafts and sent many more back for revision.  We frequently consulted with administrators.

Some might call that censorship.  I call it being “the adult” in a situation that has the potential of causing harm to the community and the very kids the school is charged to protect.