Everyone I know likes to eat.  That’s why we take a great interest in the restaurants that inhabit our lives.  In our neighborhood, we have been keenly interested in the coming of a Bob Evans restaurant.  Undoubtedly, the new establishment will be welcomed with open arms and big appetites by our citizens.  As a person who once had lunch with the real Bob Evans, I can vouch for his food and attitude.  In the 1940’s he opened a 12-stool cafe in Gallipolis, Ohio.  The aroma of  delicious sausage gravy, and the talk about it, brought folks from miles around.  Bob worked hard to serve good food with friendly service.  The rest is history.

Eating out is probably near the top of almost everybody’s list of fun things to do.  After all, it involves so many things that we love:  food, family, friends, travel, adventure, and (sometimes) romance.   There’s a certain thrill to opening a restaurant menu.  “My, everything looks so good!  Can I get that without the sauce?  How about yeast rolls?  Yes.  I’ll have the appetizer.  Dessert menu?  Certainly.  And I’ll have that ala mode.”

Those of us who have spent a lot of time spinning around on cafe stools have accumulated a myriad of culinary memories.  My first “dining out” experience involved sitting in the backseat of a 1949 Ford eating from a sack of White Castles.  That’s back when they went for a nickel apiece.  With a family that eventually grew to seven children, mom and dad couldn’t afford the luxury of a “dining in” experience.

When I aged enough to achieve the teenage triple crown, a license, a car, and a job, I was lucky enough to find myself in what some of us consider the “golden age” of dining.  In Indianapolis, that meant you could get curb service at places like the Tee Pee on Madison Avenue.  No hamburger since has ever matched the “BigTeep,” and the sweet tang of the Tee Pee side salad has not been duplicated in half a century.   There was another Tee Pee on the north side of town, where you could also find Merrill’s High Decker, which featured a radio disc jockey broadcasting nightly from atop the tower.

Those restaurants also had nice dining rooms, but they were mainly for the family crowd.  We teens preferred the convivial atmosphere among the souped-up Chevies and Fords parked under the awnings where curb girls busily kept everyone supplied with burgers, fries, onion rings, and chocolate milk shakes.

In 1948, Dick and Maurice McDonald fired all the curb girls at their restaurant in San Bernadino, California.  They installed what they called the “Speedee” system, which supplied food almost instantly to customers who got out of their cars and walked up to the window.   The Golden Arches caught on, of course, and spread like catsup and mustard all over the world.

Many Hoosiers remember our own Indiana version of McDonald’s.  It was Burger Chef.  Their hamburger patties cooked over open flames, moving along  a patented conveyer-belt system.  The process gave the burger a “grilled” flavor that garnered many fans.  The Burger Chefs are long gone now.  All that’s left is the occasional Burger Chef birdhouse one may see in one of our more mature trees.

It is true that eateries come and go.  Remember Po’ Folks?  Their Nehi drinks and Moon Pies were just the appetizers for down-home cooking.  There was also an upscale hamburger placed called Fudruckers.  Each burger weighed about half-a-pound.  Remember Arthur Treacher’s Fish and Chips?  How about  Jerry’s and Pete Steffey’s?  Carver’s in Greenwood recently joined them as a part of local restaurant history.

The building that will house the new Bob Evans was once a Laughner's Cafeteria.  Before that, it was a Frisch’s Big Boy.  As the menu changes once again, my guess is that this third time is the charm.  One thing I remember from my lunch with Bob Evans is the fact that he liked to start the day with biscuits and sausage gravy and end it with peach cobbler.  Now there’s a man with good taste. No one I know will quarrel with the prudence of that food philosophy. 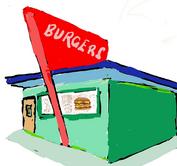