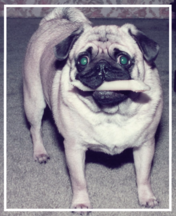 I was reminded of that recently when I read of a little boy whose dog had saved him from freezing to death in the woods.  When searchers found them, the boy credited his “best friend” with keeping him warm and providing generous licks in the face to prevent him fro falling asleep in the snow.

We all know of the adventures of super-canines like Lassie and Rin-Tin-Tin and Benji.  Lesser known, however, are those dogs who go about their daily business outside the media spotlight.

Some years ago there was a cocker spaniel named Felix who lived next door to a cat named Patsy.  Each day at 5 a.m., Patsy was let out for a walk.  One day, she was attacked by a terrier who was the bully of the neighborhood.  The cat was saved when Felix appeared and drove off the enemy.

On another occasion, Patsy was on her daily walk when she was assaulted by two tomcats.  Again Felix heard the scuffle and saved the day.  After those incidents, Felix went out each day at 5 a.m. and escorted Patsy safely on her route.

Major was a German shepherd who was owned by the postmistress of Oglesby, Georgia.  Twice a day he would trot down to the railroad tracks of the small town and retrieve the sacks dropped off by mail trains that rumbled through.  Dozens of other trains passed each day, but Major always knew which two were the ones with the mail.

There are books full of similar stories.  I’m sure we all have our own canine tales.  I have a pug named Archie.  Like many dogs, Archie doesn’t realize that he’s a dog.  He thinks he’s a person:  a very special person who deserves constant attention and countless treats.

You can’t help but like him, though.  His little pug face is so ugly that it’s cute.  He has a great sense of humor and will let you make a total fool of yourself without reminding you of it later.  He’s very smart, especially concerning things that taste good.  He knows a lot of words like “treat,” “popcorn,” “ice cream” and “cheese.”  He also knows “no” but often pretends not to hear.

I think the pug is the best breed of dog there is.  Of course, the Doberman Pinscher owner thinks that his is the best breed.  The Pekingese people are convinced that their little dog is the absolute tops, especially since a Peke won top honors at the recent Westminster Dog Show at Madison Square Garden.

There are men who will fight if you suggest that their hound dog is not superior to all others, and poodle owners are downright conceited.  They think any other pooch is a mongrel.

There are many breeds of dogs, and each one appeals to a different breed of people.  If you’re in the market for a dog and don’t know which type might be best for you, make plans to visit the Hoosier Kennel Club show this spring at the Indiana Convention Center.  It attracts top dogs from around the state.  You’ll see all kinds:  dalmations, dachshunds, akitas, rottweilers, retrievers, and St. Bernards.  You’ll discover “your” breed and soon you’ll be a proud puppy parent.

Be prepared, though, for a major change in lifestyle.  You’ll have to make room for a furry little busybody who will insist on being in the middle of everything.  He’ll need shots and tags and baths and training and treats.  He’ll also need a lot of love, but he’ll give twice as much right back.

I recommend the dog.  He’s nice to have around.  He doesn’t complain much and he doesn’t pass judgment.  When you’ve had a hard day, he’s there with wagging tail.  He’s good for your ego, too.  Aldous Huxley was right:  “To his dog, every man is Napoleon.”

Dogs are for real...and really good for us