The day begins with the gentle sensation of supersonic micro-vibrators soothingly arousing you from a deep sleep in your customized sleep chamber.  You step into a cubicle which instantly cleanses your body and quickly clothes you for the day ahead.

Your breakfast consists of small pills which represent ham and eggs and coffee, instantly dispensed from the machine in the kitchen which automatically fixes all meals for the day.  You swallow breakfast and you’re out the door of your futuristic home, zooming to work in your personal space vehicle.

Your colleagues at work are humanoid robots who assist you with your far-flung business negotiations in cyberspace.  After a long day of intergalactic haggling, you’re ready for an evening out.

You hop aboard a planet shuttle and spend several hours cavorting through the universe.  As the clock strikes midnight, you’re back home again, enjoying a cozy fireplace and a cup of hot chocolate.

What’s going on here?  It’s just another writing assignment in English class.  The task this time:  write about a “typical” day in 2096.

The papers were well done and there were many “A’s” for originality and invention.  However, in almost every story, there were a few inconsistencies.  In the example above, the jet-setter returns from roaming through the galaxy to a fireplace and hot chocolate.  These things are from the “good-old days.”  And a clock that strikes midnight?  That doesn’t sound like the way Buck Rogers would be keeping time.

Many students wrote in exquisite detail about the schools of the future.  There will be robotic teachers and time machines and brain-implanted computer chips for dates and formulas and such.  But those same papers referred to blackboards and cafeterias and lockers.  In the minds of the writers, apparently, some things never change.

Perhaps these authors are right.  We think we are living in the present.  But we’re also living in the past and future.  As we go about our lives today, we accept almost unbelievable concepts with not even a small gasp of amazement.  A cell phone smaller than a deck of cards can connect us to any spot in the world.  Television programs bring us crisp, color pictures from the other side of the planet.  Doctors use fantastic imaging devices to see what’s wrong inside of us, and they have microscopic laser tools to perform miracles of surgery.  Yet, in this same world, we still chop wood and stack it near the family room for those cozy nights by the fire.

We do it in spite of the well-regulated central heating systems in our homes.  We buy canned pumpkin for our pies, yet we still cart the real thing home so that we can hollow it out for a jack-o-lantern.  We can see movies and videos of our favorite books, or we can listen to “talking books” on compact disc.  But the bookstores and libraries are more popular than ever for folks who want to get their stories the old-style way.  We can buy boxes of flakes that will cook into instant mashed potatoes.  Yet millions of us still peel and boil and mash the Idahos just as our grandmothers did.

So it appears that we can face the future secure in the knowledge that old habits and traditions will endure.  And it seems that some vestiges of the past will survive, whether we need them or not.  In one of the student stories, the hero hops into his personal rocket for a joyride to Mars.  After he goes only a light-year or so, he encounters a traffic jam in space.

Yes, we have seen the future.  And it’s probably going to be at least a little like today. 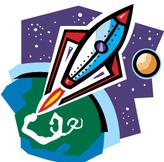