No sky above, no earth below.

A wonderland of ice and snow.

The words of “Snowbound” have come to mind frequently during Indiana winters.  It’s a long poem by John Greenleaf Whittier about a farm family isolated for a few days by a heavy snowfall.  All of us can relate to that story.  We can recite our personal adventures as we have shoveled, snow-blown, or plowed our way through Mother Nature’s frozen bounty of precipitation.

The scene out the window in the early morning after a healthy snowfall has a magical quality.  Ordinary objects are mysterious in their cloaks of white.  The fence, the telephone pole, the swing set:  They’re all transformed into glacial art.  Anyone who saw the movie “Dr. Zhivago” is reminded of the scene in which the huge house in frozen Russia is literally draped in snow and icicles.  As the author wrote, “It snowed and snowed the whole world over, snow swept the world from end to end.”

As inconvenient as it is, a heavy snow at least provides the fodder for a lot of conversation.  It tends to bring us together.  Sometimes it brings out the best in people.  Perfect strangers will give you a shove if you’re stuck.  When you’re moving again, there’s an exchange of quick waves and the good Samaritan is gone.

Although it may be hard to admit, most of us take a bit of enjoyment from extreme weather.  We like the change of pace it brings.  We like the challenge.  Teachers and students like the days off.  We know that somewhere down the line we’ll probably have to make up the time, but at the moment it’s a great delight to stay home and not have to worry about digging out.

The impact of a winter storm really depends upon your attitude.  John Ruskin said, “There is really no such thing as bad weather, only different kinds of good weather.”   That’s the stance you must maintain in Indiana.  Hoosiers have learned to appreciate Mother Nature’s moods.  We take an interest in everything she throws our way.  We follow the philosophy of Walden author Henry David Thoreau, who said, “I was  self-appointed inspector of snowstorms and rainstorm, and did my duty faithfully.”

We have learned how to handle these things.  As soon as a winter storm watch is announced, we rush to the stores for bread and milk.  But we pick up more than that.  Into the shopping cart go potato chips, dip, soft drinks, brownies, and a lot of other snacks bought purely upon impulse.  There seems to be a common understanding that snow can best be fought with food, and it’s OK for diets to go out the window when it’s frosted over with ice.

A lot of people have to admit that a winter storm is downright fun.  We get an excuse to use that snow blower we bought last year or gain satisfaction from being able to push the snow with the garden tractor.  Those skis and sleds are put to good use, too.  And it goes without saying that the proud owner of a snowmobile is in a world of bliss when there’s a foot or two of snow on the ground.

If you don’t agree that there is a lot of good to be said about snow, you’ll have to admit that it at least gives you something different to complain about.  You can grumble about how the snowdrifts in your driveway are twice as deep as your neighbor’s.  You can gripe about how your street is always the last to be cleared.  And you can always beff about how everyone over-reacts to a little snow on the ground.

So as you pull on your boots and grab your shovel to head out to that driveway for the 14th time, think of how much fun you’re having.  Ponder, too, the words of Percy Shelley:  “If winter comes, can spring be far behind?” 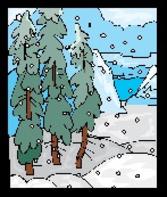