"I know you're in there!" yells a kid in a band uniform as he stands at the front door of a neighbor's home.  It's a television commercial and the boy is going from house to house, selling candy bars for his school.  He is one of millions of youngsters who valiantly march down the streets of America earning cash for Little League or Scouts or cheerleaders or other groups that need money beyond their budget.

I recall my days of ringing doorbells around the town for high school band.  I must have sold a thousand bars of the "World's Finest Chocolate" and countless bags of Artie's potato chips, all for new uniforms and music stands.  I still remember how nervous I was as I approached each stranger's door to recite my sales pitch.  I usually started like this:  "You wouldn't want to buy a bag of potato chips from the band, would you?"

My sales experience was not limited to helping promote the band.  Sometimes my own entrepreneurship was involved.  What kid of my generation didn't at least briefly join the sales team for Cloverine Salve?  The comic books of the era contained full-page ads describing in detail the riches awaiting the one who sold this amazing ointment.

Visions of Red Ryder rifles, roller skates, and baseball mitts danced in our heads as we sent away for our first case of the bountiful balm.  Selling the stuff was a bit tough, though, since many medicine cabinets were already well supplied by agents who lived on the premises.  There must be a lot of Cloverine Salve still left in the world someplace.

Like most boys growing up in the 1950s, I had a paper route.  I was a dedicated carrier of  The Indianapolis Times.  Everyone in town called us "paperboys."  As a matter of fact, that's what we called ourselves.

We Times guys were a bit tougher than our competitors who delivered the Indianapolis News.  They had small metal buildings where they could pick up their papers and talk to their managers.  Each structure was provided with a wood stove and made a cozy refuge from ice and snow.

We Times boys had no such luxury.  A street corner was our headquarters.  The bundles were tossed there each afternoon and on Sunday mornings.  Our managers sat in their cars as we shivered or roasted at their windows to pay our bills each week.

Occasionally the newspaper would conduct a magazine sale.  We were supposed to talk each customer into buying a few subscriptions that could be paid with the weekly newspaper bill.  I don't recall winning any prizes this way.  I was pretty bashful and shy, which makes me wonder now why I decided to enlist as a carrier for another newspaper.

Maybe I wanted to go "national."  At any rate, I was soon going door to door selling subscriptions to Grit.  Perhaps some of you remember this interesting weekly newspaper that was published in Williamsport, PA.

At the peak of its popularity it contained a good sampling of national news, supported by a variety of features, poems, games, puzzles, cartoons, home remedies, gardening tips, recipes, and practical information of all kinds.

I prided myself in being the exclusive Grit carrier in our area.  I remember receiving a deluxe canvas bag emblazoned with the newspaper's logo.  My memory is hazy, however, about how many customers I had or how long I maintained the delivery route.  Like a lot of childhood enterprises, this project ignited quickly and burned brightly but briefly.

Many years have passed since I trod with trepidation upon unfamiliar porches, hoping that no one was at home.  I still remember the experience, though, and these days I try to be patient when a kid comes to the house lugging a box of candy or carrying an order form for greeting cards or pot holders.  I am known in the neighborhood as a soft touch.  I guess it's because I remember when I was on the other side of the door.

Return To the Table of Contents 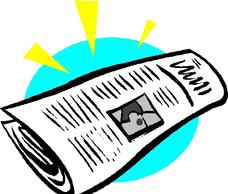 A kid's life as a paperboy and door-to-door salesman