The Grove Theater on Main Street


Most of us have grown accustomed to modern movie theater complexes.  These state-of-the-art facilities have stadium seating, surround-sound,  and fully-equipped refreshment stands.   The pictures are crystal-clear and automation makes everything run smoothly.

But do they pop their own popcorn?    To me, the buttery bouquet and the pop-poppety-pop of an old-fashioned popcorn machine is vital to the movie theater experience.  Perhaps it's because I grew up with a hometown theater.

Many of us have fond memories of neighborhood theaters that dotted the cityscape all across American in the 1940's and 1950's.  The Artcraft in Franklin is a classic example of the local movie house where millions of Americans forgot about the Depression and the worries of World War II.  Shirley Temple, Mickey Rooney, Judy Garland, Roy Rogers, and John Wayne helped create a magic carpet that carried the audience away from the everyday and into the make-believe celluloid world.

In the Indianapolis area, we had the Emerson, Garfield, Irving, Arlington, Rivioli, Vogue, Belmont, and the Grove.  The Grove was the one I knew best.  Located in downtown Beech Grove, it was the center of the entertainment complex on Main Street.  The complex consisted of  the theater on one side of the street and the pool hall on the other.

The chasing lights on the Grove marquee brought a touch of Hollywood to our small town.  "Going to the show" was popular, and the ticket line would sometimes extend down past the Standard Grocery and a little around the corner.

The theater  was packed on Friday and Saturday nights.  This was the place for us kids to be and be seen.  Sometimes every seat was  taken, at least temporarily.  A lot of the time we were out of our seats, or sitting on the edge, or sitting on top.  Often there were two of us  in one seat.  Sometimes the noise would drown out the sound from the screen.

Guys with flashlights tried to keep order, often to their dismay.  They might have been called ushers, but the term really did not apply.  I don't recall ever being ushered to my seat at the Grove.  It was an unnecessary service.  Everybody knew how to find a seat.  You grabbed it.   The guys with the flashlights would stand in the aisle and holler at the kids across the rows of seats.  A beam of light in your face served as your first and last warning before being kicked out of the place.

At the height of the bedlam, the manager  might stop the picture and turn on the house lights.  A quick lecture would follow.   This often came as a secret delight to those who weren't watching the movie anyway.  As a matter of fact, the events on the screen often were quite secondary to the action in the auditorium.  Many of us had only a vague idea of the film story, our minds being preoccupied with the more relevant and personal plots involving us and our friends.
There was one picture, however, that commanded our full attention.  Creature from the Black Lagoon  was in 3-D, the Hollywood fad of the fifties.  We dutifully donned our cardboard glasses and prepared to meet the monster.   The screen had our full attention that night.  We knew we had to be alert, as one never knew when the monster might slither from the murky water and onto the row of seats in front of you.    Screams were plentiful and we left the theater feeling the intoxication of shared terror.   Halliwell's Film Guide describes this movie as "unpersuasive and unsuspenseful horror hokum from the bottom drawer of imagination."  Mr. Halliwell must not have seen this film at the Grove.

To a small town boy, the Grove was a dark, fascinating chamber that created a kind of magic.  Spaced along the walls were sets of domed lights of red, green, and blue.  The aisle carpets were maroon with great swirls of cream.  Every other row seat contained a hooded light which streamed discreetly onto the carpet to lead the way.  On either side of the screen were curtained doorways.  Who knows to what secret chambers they  lead?  Pervading the atmosphere  was the aroma of fresh-popped popcorn, sometimes a bit  overcooked. Completing the aromatic mix were the scents of day-old Milk-Duds and melted frozen malteds, which explained the sticky floors.

The Grove Theater has been gone for almost forty years.  Vanished, too, are most of the other neighborhood theaters.  I guess one screen is not enough anymore.  That's OK. I will enjoy the new cineplexes.  I'll  just close my eyes and imagine that I'm back at the Grove on Friday night in the fifties. 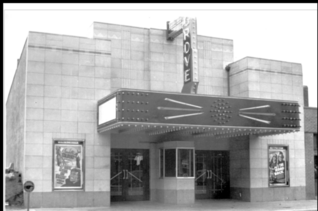 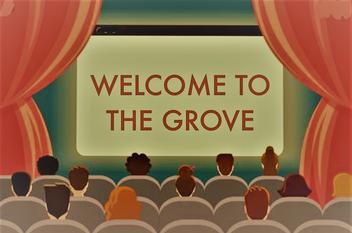