Abraham Lincoln was  born in Kentucky on February 12, 1809.   Hoosiers know that Lincoln observed 14 of his birthdays in Indiana, growing up in Spencer County between the ages of 7 and 21.  However, many may not realize that he observed his last birthday as a private citizen while visiting Indianapolis.  And therein lies a tale.

On February 11, 1861, the President-elect left Springfield, Illinois, on a train bound for Washington, D. C.  He would take the oath of office on March 4.  Although Mrs. Lincoln and two younger sons were not on the trip, the oldest child, 17-year-old Robert, was on board.  His father had given him the responsibility of carrying a black oilskin pouch.  Inside this “gripsack” was the inaugural address.

As the train traveled east through Illinois and into Indiana, Lincoln delivered short speeches from the rear car.  He spoke to Hoosiers at several stops, including Lebanon and Zionsville.

Late in the afternoon on the 11th, the inaugural train stopped in Indianapolis, just outside old Union Station.  The President-elect was officially welcomed to the city by Governor Oliver P. Morton and a 34-gun salute.   A carriage took him to the Bates House at the northwest corner of Illinois and Washington Streets.  The Bates was considered one of the best hotels in the country.

Robert and the others in the entourage walked the three blocks from the depot to the hotel.  There, Robert found that his father’s suite was not ready.  He left the gripsack at the front desk and went off to join friends.

A short time later, Lincoln stepped out onto a balcony of the hotel to address a crowd of about 20,000 people.  Soon to be sworn in as the 16th President, he was taking office at one of the most critical times in United States history.  Six states had already seceded from the Union.  Lincoln faced the issue head-on:  “I appeal to you to constantly bear in mind that not with politicians, not with presidents, not with office-seekers, but with you is the question: Shall the Union and shall the liberties of this country be preserved to the latest generations?”

The speech was well received.  By this time the rooms were ready and father and son were prepared to settle in for the night.  It was at this point that Robert went to the front desk to retrieve the bag his father had entrusted to him.

The young man was stricken with fear.  He later wrote, “As soon as I missed the valise, I went to father, in great distress of mind.  He ordered a search made.  We were naturally much alarmed, for it was the only copy he had of his inaugural address, which he had carefully written before leaving Springfield.”

The venerable Bates House must have been turned upside down that evening.  After some frantic hunting, the pouch was found among other bags piled up in a back room.  There were sighs of relief all around.

Robert wrote, “Instead of taking out the precious manuscript and stuffing it into his own pocket,  Father handed it right back to me, saying:  ‘There, Bob, see if you can’t take better care of it this time.’”

Lincoln awoke the next morning in his suite at the Bates House.  It was February 12, 1861, his 52nd birthday.  He had breakfast at the governor’s mansion.  Then he accompanied the governor to the Statehouse where he was introduced to members of the Indiana legislature.

When Lincoln returned to the train at Union Station, he found his wife Mary and young sons Willie and Tad waiting for him.  They had ridden all night in a sleeper car to catch up with him in Indianapolis as a birthday surprise.  Lincoln was overjoyed to have his whole family aboard as the train traveled on to points east.  It was a happy birthday, indeed.

Regarding the scare at the Bates House, Lincoln, an admirer of Shakespeare, might have said, “All’s well that ends well.”

And that black pouch?

Robert Lincoln wrote, “I hardly let that precious gripsack get out of my sight during my waking hours all the rest of the long roundabout journey to Washington.”

Lincoln's son Robert had some moments of panic on the stop 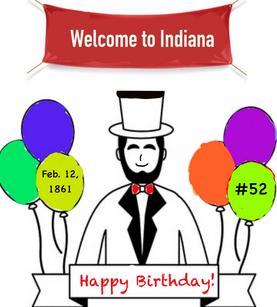 On his 52nd Birthday, the President-Elect woke up in the Bates House Hotel in Indianapolis